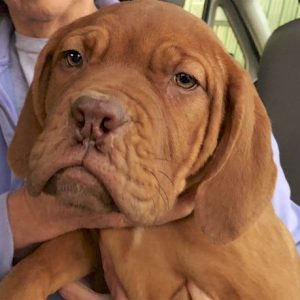 Little baby bear Jack O Lantern met his mama and his daddy today. He will be going to live in Fayetteville, AR with Vickie and Mike Lanier who also adopted two of Magnolia’s puppies Tinsel and Nutmeg. They’ve already set up puppy and training classes for him and with Mike being retired he will have plenty of time to make sure that Jack is off to a positive start.
I asked them what his name will be and they said he will always be known as Jack so there you go, little Jack O Lantern will grow into a great big Jack O lantern.

What’s cuter than a bear pup?

I say nothing. This little man is the brother of Cinnamon Toast Crunch and Fruity Pebbles who are staying with foster mom Cassandra. They are from the same litter, but he’s a big pup much bigger than his sisters. A little bit shy but we expect him to come out of his shell very soon while staying with Julie.