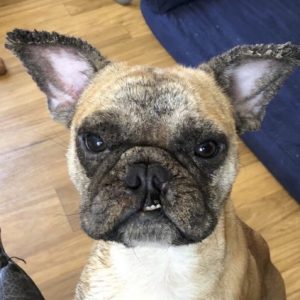 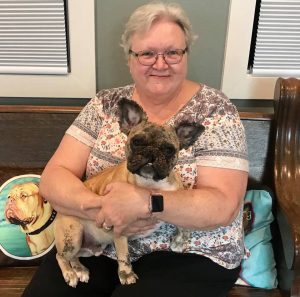 That’s when we were contacted by none other than our family member for and volunteer for Dog Ranch Rescue Mary Jones, you all know who she is, she has fostered so many dogs for us and she’s adopted 3 red bears from us with two of them being special needs, Pepper with epilepsy and Mallory with a heart condition.

John Merricks condition doesn’t deter her and she said shes loved him from the very beginning and would love to take him home and give him the life he deserves. Mary lives very close to Texas A & M and John Merrick couldn’t be closer to a very competent Dermatologist that he will always need.

Mary took John Merrick home today and Karla had lots of tears, Karla and Neal have grown to love him after caring for him for months and months now but they are happy that John will be with Mary and will be able to see him over and over again.

John Merricks name shall remain John and we will all be seeing plenty of this very special boy for the rest of his life.

He’s only 10 months old, he has a severe cleft lip and in addition his face and his ears are consumed with what I’m just not sure. We were told it was hyperkeratosis but if it is, it’s not like any hyperkeratosis I’ve ever seen before. Dr. Reno says we can’t rule out demodex that’s out of control, it could be fungal, or something else altogether.

Julie and I took him to the tub and began soaking and scrubbing and got a lot of it off but there is still much more where that came from. He has nothing on any other part of his body, it’s all on his face and his ears.

John Merrick went off to see the dermatologist yesterday and she got me on the phone while he was there with Julie. First thing she said was oooooh this is an interesting one and she took him off to go show all the other dermatologists in the office.

There’s a few things that we might be looking at but the one thing they are leaning towards the most is an abnormality in zinc absorption, they have seen this before and most of the dogs that have this do recover with zinc supplements. The second thing it could be is severe food allergy and the third is a problem with vitamin A.

They asked if they could take punch biopsies of a couple of places on his ears where they could send those off. The biopsies will take 7 to 10 business days to come back but if it is either one of those deficiencies ( zinc or vitamin A) it will show in the biopsy. If those are negative we would be looking at an odd food allergy so to start with we will be doing everything, the biopsies were done yesterday and he has been put on a hydrolyzed protein diet that will basically be different than anything he’s ever eaten. If the biopsies come back positive then we know its not food related and he will return to eating a normal diet. A zinc supplement will be started right away to see if it helps while we wait.

I asked if anything can be done for him in the meantime and she has put him on steroids and antibiotics for the secondary infection that he still has from all of this crust. She said we could try soaking it soft and removing it just like we have been but you need to know that it will always come back until we get to the root of what is causing it. The good news is if it’s the abnormality in zinc absorption they typically have good results with treating it so we are certainly hoping for that to be thee culprit.

Okay, let’s have a long conversation about John Merrick. He returned to the dermatologist to be examined. Dr. Crow was his dermatologist today and I spoke with him over the phone as Karla had driven him for his exam.

He explained to me that even though JM tested positive with a biopsy for zinc insufficiency he wasn’t convinced that is what it is. He offered to try and up his dose and give it a couple more months but he really felt we were looking at ILVEN which is inflammatory linear verrucous epidermal nevus.

We discussed the question if he was painful or not and honestly it was hard to answer that question because JM has been scrubbed of this crust and he was then very painful so is the condition painful or is the scrubbing making him painful. I stopped anyone from scrubbing him about 10 days ago and Dr. Crow agreed that no scrubbing of this crust is to take place again. The ILVEN does have pain associated with it and Dr. Crow honestly feels like even though he might have zinc insufficiency he truly believes this is ILVEN and one of the big reasons is because JM has a cleft palate and the condition of ILVEN is associated as a birth defect.

Dr. Crow and I both agreed to stop with the zinc and to move into the direction of treating ILVEN and that will require a compound pharmacy to make him in capsule for Accutane. Once this drug comes in he will be started on it and we will not soak or scrub his crust again and see what happens. He also informed me that this is not a curable condition and instead would be controlled. JM will always be on medication for the rest of his life and he will never be a normal dog with normal skin, how clear willit get? only time will tell.

I would like to address a few people who spoke up and were sure that this condition John has is Pemphigus, Dr. Crow said it absolutely 100% is not
Pemphigus..I just wanted to clear that up. Also lots of people want to put things on it, lotions, oils, and potions..none of those things are the answer.

This is a very rare disorder and one of the reasons we utilize highly specialized veterinarians, this condition is not something that is diagnosed by general practitioners and Dr. Crow is a very highly sought after dermatologist.

I’ve included the clinical summary of John Merrick for those of you who like to read and understand what exactly is being said by Dr. Crow.

I will update as we move forward but I would expect this crusty face to worsen before it gets better. John Merrick is just a pup and he’s pretty weary at the sanctuary, thankfully Karla and Neil have offered to take this little man home and foster him and we are very grateful as we know that’s just what he needs. In addition John Merrick doesn’t have an adopter waiting for him, we hope that there is someone out there who will accept him and love him regardless of this condition and we are sure if there is one the village will find them…

t’s time to sit down and have a very lengthy and involved conversation about John Merrick.

We have had John Merrick in our rescue for 6 months now, and have been working to find a solution to his issues. At first it was thought the condition was caused by a zinc deficiency, he was put on zinc for that and it really didn’t help. He was then seen by Dr. Crow who was pretty darn sure it was a condition called ILVEN (inflammatory linear verrucous epidermal nevus) syndrome.

This is a pretty rare condition that there is no cure for, all we can do is to try and manage John and keep him comfortable. ILVEN can be painful with some, but Dr. Crow doesn’t think that he’s painful, and that he can live a quality life.

He is currently on a drug called Isotretinoin that is compounded, this is a synthetic vitamin A derivative, and is more commonly known as Accutane, since being on this we have seen no improvement, and we now see the crust happening on his lower legs as well.
Dr. Crow says the additional ones on his legs have convinced him that this is in fact ILVEN. He will be on Isotretinoin for the rest of his life, he will also need to have regular checkups at the dermatologist to check his blood levels, check his eyes for good tear production, and check for secondary bacterial infections as well as any accumulation of yeast.

ILVEN is a birth defect and John Merrick has a cleft palate so we know that this is just a second birth defect for him. His skin is not normal and it never will be.

I talked to Dr. Crow and asked him is it possible to every 4 to 6 months to sedate him and try and remove them because they continue to grow larger and heavier. He said absolutely yes, but it wouldn’t be scrubbing them, that will never happen again, he said instead what we will do is sedate him and trim them back like if you were cutting toenails, this hyperkeratosis on his face is very hard and it feels like toenails and he doesn’t want you to touch them, however he does like to rub his face on a blanket so we know it doesn’t hurt him, or he wouldn’t do that.

Dr. Crow still feels like with several more months of the Isotretinoin we could see some of these begin to drop off, but he also wants it to be clear and understood that he will always have this, he will never look like a normal dog, and this is in fact who he is, and how it will be.

We have scheduled this trimming to happen next week with Dr. Crow and we feel like that should be something that is done consistently.

We cannot do anything more for John and feel its time for us to find his forever home. We don’t know how many people would be open to adopting a special needs dog like John but we are certainly going to find out.

John Merrick is good with other dogs, he’s happy playful very young dog and is a delightful funny little guy. He needs to be adopted by someone who has a dermatologist nearby where Dr Crow could consult with them.

John Merrick was named after the man that the movie The elephant Man was made about. Some people thought it was mean, I thought just the opposite, just like the man John Merrick…all he asked was that people not judge him by how he looked, instead to just love him for the man he was..

I ask the same for this little man, he might look very strange indeed but inside there is a lovely little dog that needs a home…

Let’s see if the village can find him just that… 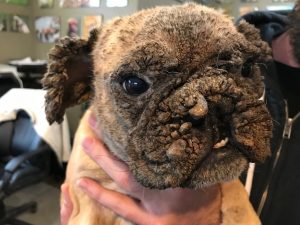