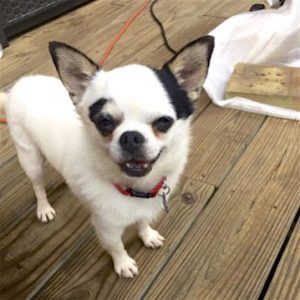 New Name: King Roo
Age: Adult
Sex: Male
Breed: Chihuahua
Weight:
Current Location:
Adoption Date: August 4, 2019
Adopted by: Asheley Rodriguez
Latest Update:
His new name shall be King Roo
He has been adopted by Ashley Rodriguez from Bryan, TX. We have worked with Ashley in the rescue world as she is the manager of the Bryan, TX animal shelter. She loves the Chihuahua breed and King Kong will have his own gaggle of Chi Chis at home to play with when he is not at the shelter office helping Ashley run things.
About King Kong:

He’s the cutest Chihuahua ever seen, we had to battle for him as he was obviously very desired by the mill owners with a lot of champions in his AKC background.
We were determined he wouldn’t continue with this life and so we won the bid and that was that.
He just turned 4 years old and weighs approximately 4 pounds.