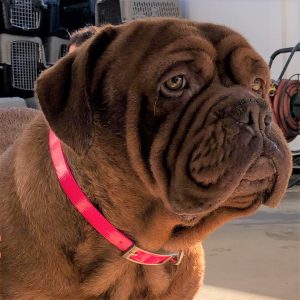 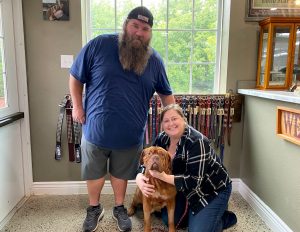 So we had a sad story that happened a few days ago, Kisses was returned, she is just like her brother Cupid both from a mill, both very shut down, very shy and think the world is scary. The family that adopted Kisses returned her when they just didn’t feel that her being fearful was something they wanted to tackle. Laura immediately reached out to the Land family who had adopted Cupid now known as Walter to see if they might be interested in Kisses joining their family and being reunited with her actual brother. The Land family has a Bordeaux named Nibbs as well. They thought on it over night and the next day they said yes, we would love to have Kisses and so that was that. They came to pick up this very sweet shy girl and took her home and filled us in on the introductions at their home.
“We’ve officially named her Rubi, and she did show some teeth to Nibs a couple of times but that put him in her place real quick and now he is respecting her space. They went on to sniff butts politely. Walter and Rubi’s reunion was lackluster, but you could tell they do know each other and Walter was ready to protect Rubi once we finally brought Nibs out. It was really sweet. But then he saw she could take care of herself and laid down in the corner, ha! Now we’re all just laying in my home-office like nothing ever happened.”
We are so grateful for the family to swoop in and be the hero for Kisses in this situation, Cupid aka Walter is doing great at their home and they are fully versed in the shyness they will experience from Kisses now known as Rubi and we wish all of them a happy life together…
About Kisses:

Both of the Bordeaux’s are gorgeous and very large and very dark red. They are brother and sister and she is in heat so the male will be coming to the Ranch.I am assuming both of them have entropian and will need eye surgery. This big girl has lots of pain in her eyes and its terrible they have been neglected for years.

Both of them are very shy and frightened but thankfully will walk on a leash. Their birthdate is 5/30/16 this girl is formerly # 126 and weighs in at 101 pounds.

A little peek at Kisses, remember she is Cupid’s sister, they are both very shy and the volunteers are spending a little time with her getting accustomed to people touching her and making her more comfortable with that. 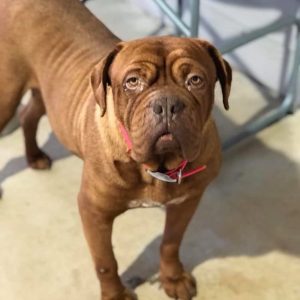 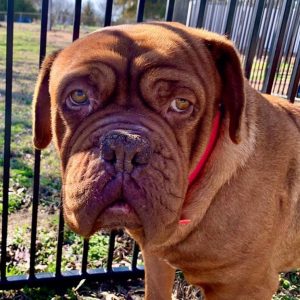