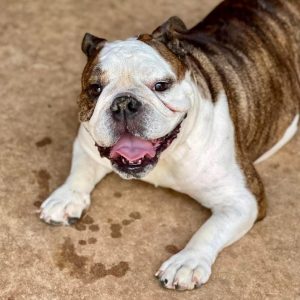 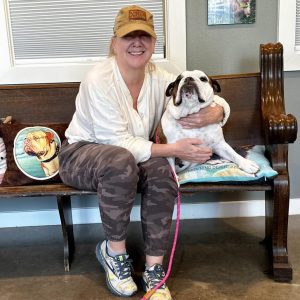 Kosher had a long journey through rescue having been adopted and returned. She was so sad at the Ranch and missed her people but found her way into a foster home pretty quick where she was smooshed and snuggled and loved hard while she waited. She waited 3 long months for the right person to offer her a spot in the right home so she can live her best life, having the freedom to be her silly, sassy self without worry.
In comes Jane. Jane had an English Bulldog, Bella, who passed about 3 months ago from cancer. She looked at several rescues but didn’t feel that special “something” for any of the dogs she saw. Then, she found Kosher and she just knew she was the one.
When she met Jane, she was a little nervous. In a strange place with a strange person, she trembled a little, but didn’t shy away. After some formal introductions and a little time to warm up, she was gladly sitting her fat little rump between Jane’s feet while Jane gladly scritched her and scritched her. Then she scritched her some more. And Kosher was in heaven.
After spending some time hanging at the Sanctuary, Jane loaded Kosher up into her chariot and they rode off into the sunset to her new life in San Antonio. She’s already been to the vet and received her first (of many, I’m sure) toys to play, play, play. Oh, and she has her very own condo under the stairs! She’s the only dog in the house and I have a feeling that she’s going to soak that up and be a happy girl. Just her and her new mama. She’ll have visits from the grandkids from time to time too and I’m sure she’ll be happy to soak up their attention too.
We can’t wait to see updates about this very special girl on the Happy Tails page. Jane is still deciding on her forever name, but she knows it won’t be Kosher. For now, I’ll say “Happy Life Kosher”!
About Kosher:
This girl is coming to Texas, she was born on 9/29/17
Formerly # 186 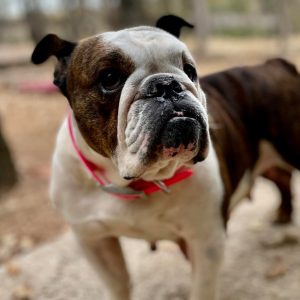 I will share an update for all of you about Kosher because we need to find her a home. She lost her first home because she took control and beat up another dog in the house. She has since been staying with Ana and she provides some information for us on how she is doing in her home. We will be looking for a home for Kosher where she is the only dog, even though Ana has her under control as you will read we just aren’t going to take the risk of a new home that cannot make sure and be in control, it’s just not worth it to us.
Here is Ana:

“Kosher is doing well. We had the incident at the beginning but nothing since. She love love loves people, going for car rides, walks and sitting in the garage with the DogFather watching the world go by. She doesn’t play with the other dogs and growls at them when they’re roughhousing and get too close to her but responds to correction immediately and doesn’t really care what they do if they’re not in her “bubble”. Like right now, I have the 3 Frenchies, Kosher and most of the other dogs in my office with me and the Frenchies are in a wrestle ball and Kosher doesn’t care. She just wants my attention. She loves to play and wrestle with us though. She’s definitely tolerant of the other dogs. Just this morning we were outside and Max was pawing at her a little bit like he wanted to play and she didn’t engage him but she didn’t respond negatively either. She just ignored him and wobbled over to me and asked for pets and Max moved on to someone else. Based on what I’ve seen here, I think she would be fine in any home as long as there’s a strong pack leader. If someone is looking for a play buddy for another dog, she doesn’t fit into that category, but I think she’d be ok with other balanced dogs in the home as long as the people set appropriate boundaries. She used to growl and lunge at other dogs when I would allow her to sit with me on the couch. I’d give a verbal correction and promptly place her on the ground. I’d wait a few days and try again. It only took a few times before she got it. Now, I can have her and other dogs in my lap at the same time and she doesn’t care. She’s very affectionate and figured out pretty quick that, if she doesn’t act right, she doesn’t get any. She can be pushy when she wants attention though and I suppose that could turn some people off (insert Annabelle’s meat waffle failed adoption eye roll here). I don’t pet her until she settles down, so we’re working on it. She has no issues with house training. She’s not destructive. She’s stopped crawling under our bed. She goes in her crate when you tell her too and doesn’t complain while she’s in it. She really is a wonderful dog.”

Ana checking in with how this pickle is doing:
Kosher went on her first pack walk with us this morning and she did great. She happily waddled right along with everyone. She’s met all the dogs and is eating out with everyone with no problems. She slept in her crate all night without a peep. She’s very sweet and loves pets, though we’re giving them sparingly.

I asked Andy if he wanted to add anything and he said “she’s cute AF”.

To have a foster like Ana who will foster not only one dog but multiple dogs is a Godsend. She currently has Missi who has no interest whatsoever for adoption. She has Nala as well who also has no interest whatsoever, but she saw Kosher returned and knew that she was very sad with losing her home and she reached out and said she would be happy to take this little Bulldog home and make her a happier girl while she waits for a new home.

Kosher did not look back at the ranch and instead told Ana thank you lady for caring so much.

This is one of the parts of rescue that I could do without. The return of a dog is something we never want and I feel like a broken record saying the same things over and over again.
This is Kosher she was adopted 8 months ago and returned yesterday for fighting with the other dogs in the home. The issue is the same issue that occurs when most dogs are returned, and that issue is the dog taking ownership of the home, the owners, the sofa, the bedroom, the kitchen, the toys, the the the the the….you get my point.
They see the dog as aggressive when she absolutely is not an aggressive dog, an aggressive dog would be aggressive with other dogs at the ranch and she of course isn’t, she is pretty lost today not knowing why she has lost her family, but we can’t focus on that now. Now we focus on finding another home for her and from our perspective its probably best to find her a home without other dogs even though we know full well she can co-exist with other dogs. We just don’t want her to take ownership of another home and cost her another family that would be lost to her again. 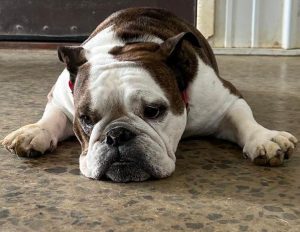 We are still looking for the perfect fit for Kosher. She is staying with Millie and of course Millie adores her. Anyone who spends anytime with Kosher knows she’s a doll. Kosher can be a tiny bit dog selective. She does not like wiggly wild dogs in her face. She’s not a fan of wiggly silly puppies either. She spent quite a bit of time at the Ranch and did well with 98% of the dogs there. Laura would like to place her in a home close by, so if there is any trouble we can be close enough to help.
Here is Millie telling us how she’s doing at her house:
“For a dog that has spent her life as a mill dog, Kosher is just one happy girl. She has such a happy, bouncy personality. She loves to play with toys and really loves to go for walks. She gets a long with the majority of the dogs in my house. She does not like a certain young dog jumping in her face and it’s hard to blame her. She sleeps all night in her crate and wakes up slowly. She’s really funny at night because she goes to bed about 8:30 but I always check one more time about 10:15 to see if she needs to go out. She always comes out of her crate and goes all the way to the front door but then puts the brakes on ..she won’t go out … nope. She turns around and goes back to bed. Makes me laugh every night. She never has an accident in her crate but we’re still working on house training during the day. She’s making progress and tries hard to be a good girl. When she’s excited she bounces around letting you know she’s s happy girl. When she’s tired she just drops wherever she’s at and collapses. Zzzz
Love this girl!” 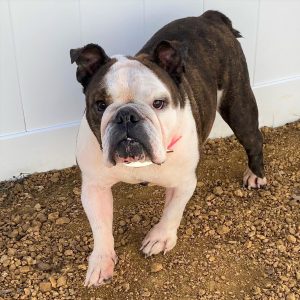