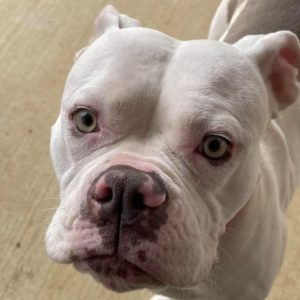 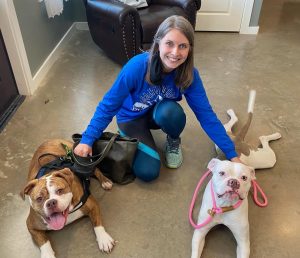 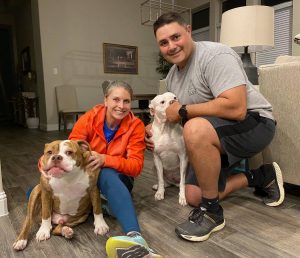 Kylee Self has joined her new family in Melissa, TX! Katherine Oslin & Dominic Saleh knew their 10 month old dog, Otis, needed a playmate and came across Kylee’s story and felt they would be a great fit as her family. Their work schedules allow them to be home so they can watch Otis and Kylee wear each other out playing all day long. They are leaning towards the name Sky as her new name and will update us on the happy tails page.
About Kylee:

As Joe Wolf checked into the ER Laura got a call from Dr Murray who was on duty asking if there was any way we could help this girl that was brought into the ER with an intestinal blockage, the assumption is a sock. The owners couldn’t help and she would lose her life.

Dr Murray said please help her and take her into your rescue she’s just the sweetest thing. How could we say no to that face?

Her expenses will be ours, will be yours, but she won’t be euthanized and we will get her taken to surgery to look for what’s causing the issue. My concern is how long has she been sick with this blockage as she looks pretty sick and very thin.

I will update when we know more about how she has done in surgery.

Kylee Self who is a flight nurse with Aerocare out of Lubbock TX. She had to reschedule her wedding and continued to work and fly with Covid patients throughout Texas.

Kylee has come back to Dog Ranch Rescue and now its time for us to find a new home for her. Kylee is a sweetheart and she is great with other dogs and wonderful with children. Kylee is a young girl and has lots of energy and loves to play, she will need an active family.
We will be moving her to the Ranch as soon as the crowd subsides from Spring Break as the sanctuary is too boring for a dog who is already healthy and active and doesn’t need to rest and or decompress. It makes her sad to be there and she needs much, much more activity and the Ranch will be perfect for her.
Kylee needs no vetting and is ready to leave asap we just have to get her out there and find her home. Kylee is mostly Boxer but has a long tail and unusual coloring of white and Beige. 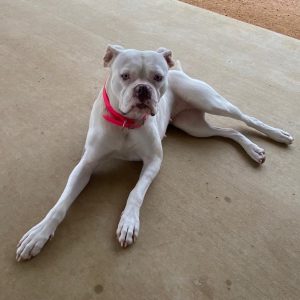 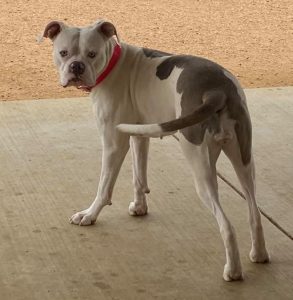 Back in August at the same time we had Joe Joe in the ER with a rotten leg that had to be amputated. Kylee was dropped off by her owners at the ER with a blockage that they were unable to pay for so she needed to be euthanized. The ER doctor called us and asked if we could save her and we said yes.

She went into surgery and had a towel pulled out of her intestines and she then began the road to recovery. Christi fostered her and watched the light come back in her eyes and the pounds come back to her body. She was adopted by a previous client of LSDR and all was well.

This week we learned that an accident has happened and her mom is injured very badly and they feel its best to return her.

“I am very sad to inform you that we have failed to be the right rescuers for Kylee. Our 6 month journey with her has been filled with joy and multiple successes. After surviving the towel surgery she has recovered and become one of the most sweet, beautiful, obedient, and loving 65 pounds of solid muscle God has placed on earth. Unfortunately the 65 pounds of muscle combined with bursts of puppy energy resulted in a terrible accident. 7+ weeks ago, my wife, Diana and I were roaming around the lake with Kylee when she burst into a “puppy run” and at full speed ran into Diana and badly broke Diana’s leg. The injury has required Diana to not allow any weight to be put on her leg and sit/sleep reclined this entire period. I have been home with Diana and Kylee and unable to leave the house for virtually the entire 7 weeks. Diana is suffering what I would describe as PTSD from the event. She dearly loves Kylee but will be unable to function without fear of another accident and for that reason we must return her. I’m not exactly sure when I will be able to leave Diana home alone so that I can bring Kylee up to Anna. We should know more about the timeframe the doctor will allow some limited weight bearing on her leg after an appointment this week. I am so sorry for our failure. We know Kylee will be a wonderful addition to a new family. Please let me know anything I can do to make her transition back to the Dog Ranch go as smoothly as possible”

We are so very sad for them all and of course they didn’t fail her, but this is a serious situation and we need to do the right thing and find a new home for Kylee. She will be coming back sometime this week and ideally I would like to find her a new home in time for her arrival. She is a beautiful dog, a lovely soul and a young healthy girl.

She is great with other dogs and loves kids and we know that her home is out there with her being an active girl.

Time to peek in on how skinny girl Kylee is doing. Once again she is another dog from the ER doctors who called to see if we could take her into our rescue so they didn’t have to euthanize her with a blockage of an entire towel in her stomach. We were happy to help and what a sweet girl she is. She is gaining weight steadily and doing fantastic.

Kylee had her surgery and she did have a blockage but it wasn’t just a sock, instead it was an entire towel. She is very thin so I’m not sure if she ate the towel because she was hungry or she became thin because of the blockage. We will never know and it doesn’t matter now. What matters is that the surgery was successful and she will be feeling much better moving forward. 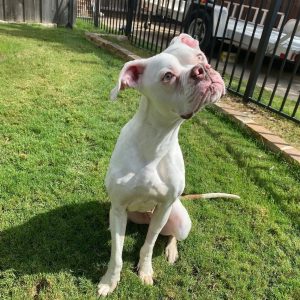