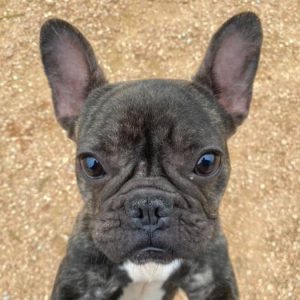 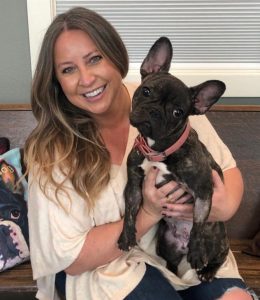 Like a thief in the night Courtney Klecka scooped up our sweet Leopard Frog this morning and took her home. Volunteers won’t be expecting her to already be gone but rest assured she was given lots of kisses by the morning shift on their behalf.

Courtney adopted DRR alumni Isabelle back in 2015. She lost her about a month ago after a sudden illness and was heartbroken. She wasn’t looking or ready for another dog but she happened to see Leopard Frog on the page and her story and face just spoke to her. After some serious thought she was overcome with the feeling that Isabelle may have left her so that another dog could fill her heart. She reached out to Laura and that’s where their new story began.

These two fell in love in the lobby of the sanctuary and Leopard Frog happily jumped in the car and off they went. Courtney will update us with her new name and adventures on the Happy Tails page and we all look forward to that.
About Leopard Frog:
She was the youngest Frenchie in the auction at almost 3 years old. She had a litter in January and it says she had 6 pups and raised 4 of them, but the seller had to raise the other two, so that is a problem, They always want the mama dogs to do all the work and do it on their own.
She was born on 7/20/18.
Formerly # 271
Say hello to Leopard Frog