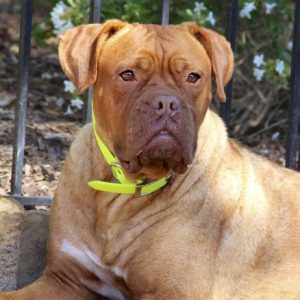 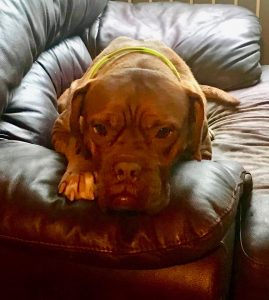 As soon as Louise arrived and it was learned that she was the mother to Reyna, Twist and Hustle… foster mom Cassandra and her son Scott knew they wanted her to be in their life. They lost their beloved Reyna to a brain disease and here was her mama rescued at last after years in mill after mill making money for some sob.

We asked her and Scott if they wanted to come to the Ranch and spend some time with her and they said of course. Travis told me that he set them up to meet her in the lounge, they brought Reynas collar for her to smell. He cleaned up the yard and set up chairs and told them to take as much time to meet her as they wanted and left them alone. He said the emotion was palpable.. and this precious girl is an absolute gem.

The radiologist has looked at her X-ray and he says that her stenosis is aortic. This is what Dwayne died from and the prognosis is problematic at best. Her heart is already enlarged and she is 5 years old. She is scheduled for an ultrasound tomorrow and we will continue to run through diagnostics to see if there is anything we can do for her to save her life.

Cassandra came and picked her up today to be her driver for her ultrasound early tomorrow morning. I asked her if she just wanted her to stay with them forever? She said absolutely. I told her we don’t know if we can save her and she might only have a short time left in her life. This is what she said to me:

“We both understand and remain steadfast. She is meant to be, and if love is all we can give her we will do that 1000 times over for as little or long as she has”

It made me cry, this is a very special girl who deserved so much more in her life, she is full of joy and although she’s never had anyone to love her like she deserved she’s just a happy sweet soul regardless…

She took her home and in minutes she took up the chair that Reyna called her own and shortly after moved into Scott’s bed who had lost his favorite girl Reyna who slept with him every night. How ironic is it that he now has her mother to keep him company. No matter how long it was just meant to be and so with that we will announce that Louise is home…

While at our maximum with rescues we became aware of this girl and another Bordeaux at an auction. There was so much discussion about them and could we get them or work with another rescue to place them, anything to get them out of the mill. Our option was to get them and bring them to the Ranch so that’s exactly what we did.

She is in terrible shape with infected ears and skin, fleas and ticks. She looks like she’s had nothing but litters over and over again with her teats hanging halfway to the ground. But she is confident and social with other dogs and she enjoys being around people.

She was advertised as just having a litter of 7 in August of last year but those days are well past her now.

After testing with Dr. Reno, we’ve discovered Louise has a grade 3 stenosis of her heart and a bulge is clear to see in her x-rays. We don’t know yet if its aortic or pulmonary and we don’t know yet if anything can be done yet to try and correct it. Her ultrasound is scheduled for next week where we will get more answers about that.