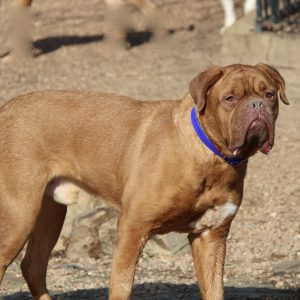 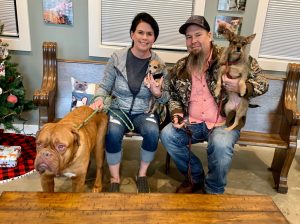 Ludwig, the sweet, calm boy who was dumped because his owners wanted to have a baby, now has his happily ever after.
His new mama and daddy are Leigh and Loyde Jackson from Houston TX
Leigh Jackson said when she saw Ludwig’s sad face on our Facebook page she just new he was a good boy and her heart wanted him. Leigh and her husband Loyde have experience with the mastiff breed but this is their first Bordeaux. Ludwig will have three siblings – Stella, Oakleigh, and Pepper to spend his days with. While his new name has yet to be decided, Leigh said she will let us see Ludwig’s adventures on the Happy Tails page.
We wish you the best life you deserve, sweet boy!

This boy was surrendered by his owner yesterday. He will soon turn 5 years old, he is already neutered and described as a sweet gentle boy. All I know is they recently had a baby and don’t really want the dog anymore. I will leave it at that and focus on him. He is a little shy right now which is to be expected but is doing great with other dogs. He will have his exam next week and hopefully he isn’t HW positive, if he’s not he will be ready for adoption asap.