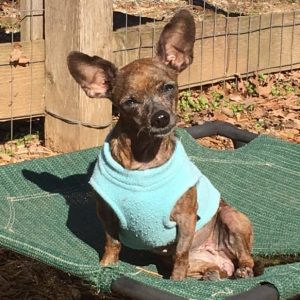 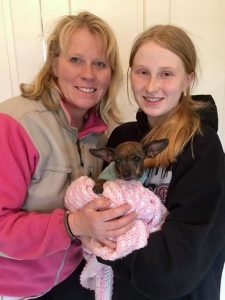 We hurried to get another adoption completed yesterday before storm- aggedden hit. Millie facilitated the adoption of the wonderful little Lupe.
We rescued this dog because Laura was just sick about it looking at her gigantic incision and huge mass on her abdomen in the shelter. We decided we would just take her out of there even if she had to be euthanized, at least she wouldn’t die in the shelter.
But she didn’t die, the ER took great care of her, she did have a cancer diagnosis but that didn’t mean she couldn’t have quality of life for however long she could. The tricky part is fining a home for her, but the village is a shining star at doing just that.
Millie:
Kristen Gregory and her daughter Claire braved the freezing weather today to come out and adopt our little Lupe. Kristen, her daughter Claire and son Andrew live in Flower Mound and have four other rescue dogs at home. A ten year old Wheaton Terrier, a 10 year old Dachshund and two terrier mixes. Not only does Kristen have the four dogs she’s adopted, she’s also an experienced dog foster and has fostered many dogs. Lupe’s medical history did not scare her away; it actually made her want her more. She works from home and has time to help Lupe get adjusted in her new family. They had been wanting to add a chihuahua for awhile and when they saw Lupe she just tugged at their hearts as she did ours. Happy life little one… you deserve the best. I’ll be watching for you on the Happy Tails page.
About Lupe:
Last Friday this story from the shelter in Dallas came into Laura’s newsfeed and she was struck by this little Chihuahua. She is a 7 pound little girl that had a 1/2 pound mass when she came in. Surgery was done to remove the mass which is a huge surgery. The shelter was no place for this dog and Laura was just heartsick looking at her.
We discussed and we all knew that the prognosis of this little girl isn’t going to be good, this is most likely a cancerous mammary tumor and she most likely isn’t going to have a good outcome. The shelter has no ability to send off the tumor for biopsy but it needed to be done. We talked it over and Laura and I decided we didn’t care, we are taking her out of the shelter and to the ER where they can absolutely make sure she has no pain, she is clean and warm in a quiet environment while trying to recover. We weren’t sure we would even tell her story, it’s not a great story to be told if all we are doing is taking her out of the shelter and then discover she has a very aggressive form of cancer and then opting that its best to euthanize her, and stop her suffering. So we didn’t talk about her and instead Laura called Ricky who ran down to the shelter and picked her up, and picked up her mass too, and drove her to the ER.
Dr. Reno requested we get 3 views of her lungs, and 3 views of her abdomen looking for cancer anywhere else, they came back negative after the radiologist read them. Dr. Murry said the staples all along her incision were swelling and painful she she put her under a mild sedation and removed them all, and replaced them with sutures instead. She did need a transfusion just to get her more stable and since that time she has been doing very well.
We are now requesting that Dr. Bronstadt do an ultrasound on her abdomen and chest looking for any cancer that might be obvious to see and after that we just wait for the biopsy on the mass to return. Who knows maybe it will turn out to not be cancer, or maybe it will be a type of cancer that isn’t horribly aggressive, or maybe it won’t be good news at all.
Bottom line is we didn’t care, we are just going to do right by her either way. Millie has agreed to foster her and we heard this morning that she is stable enough to go home while we wait for biopsies to return.
They love her at the ER and said she is just a sweet, sweet little girl with a lot of fight in her.

Millie says she is just the sweetest girl and is just a lovely dog with other dogs. Lupe has had a rough time with the enormous mass that was removed from her body, an incision as long as she is but that doesn’t get her down. She has an appt to see the oncologist soon and we will know more about her health then, in the meantime she is loving life.

Lupe continues to recover from this enormous surgery removing a gigantic mass and a few small ones as well.
Her incision looks so much better and the biopsy has come back on all of her masses. Unfortunately, the pathology on the large one did come back as spindle cell cancer. They did take lymph nodes connected to the mass and the lymph nodes were clear. The other small masses were also clear. This type of cancer usually metastisizes in the body even though we can see no evidence of this at present, we had all x-rays taken and ultrasound on all organs and no signs of metastasis was found. The vet said he would be cautiously optimistic. Dr. Reno said she needs to have chest radiography every three months two or three times and then if nothing, every 6 months.

Lupe is 10 years old and a very sweet girl. Millie said she has a Chihuahua face but a Dachshund body. About 8 pounds and we are hoping for the best for her and once again we will be looking for a lot of homes for dogs that need a family willing to adopt dogs with issues that may be ongoing.

Millie went to the ER to pick up Lupe and take her home. Dr Bronstadt found no other signs of cancer on ultrasound or x-rays so now we wait for biopsy.
Millie sent this little early update:
Lupe is out of the ER and is settling into her new foster home. She has eaten, taken all her medicine, peed and pooped. She needs to wear a cone so that she doesn’t rub or scratch the stitch area .. luckily the stitches will dissolve so there are none that have to come out. They want her to be some what confined in either a crate or small pen area and just go out for potty breaks for at least 14 days. She doesn’t like the cone and she’s feeling a little unsettled right now with all the changes but knows she’s safe and just fell asleep.

PS .. when the vet tech brought her out she said they were all in love with her … I don’t think she wanted to hand her over 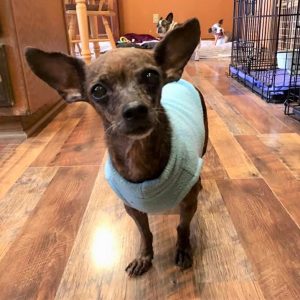