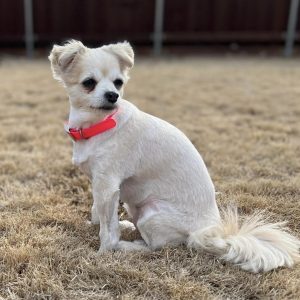 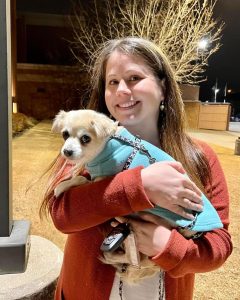 Little Macy, needing to find a new forever home after her dad unexpectedly passed away, tugged at all our heartstrings. Today, we can share that she has found her forever home with previous adopters Liz and Ryan Starkey in Nashville,Tennessee. They previously adopted frenchies Paris and Yodi who were in a similar situation of being in the rescue with the passing of their owner. Both Paris and Yodi recently passed away after having had years of a loving home with Liz and Ryan and they felt they were ready to adopt again. Macy will be joining a sweet chihuahua sister, Rippley, and have all the snuggles and walks her little heart desires. I know it brings Macy’s original owner’s family some peace that she will be so loved and taken care of. Thank you Liz and Ryan for adopting and giving Macy a new forever home.

About Macy:
It’s raining it’s pouring, owner surrenders, returned rescues, 7 mill dogs coming tomorrow from Arkansas that Ricky will go retrieve.
This one was a request from Millie if we could help. We don’t say no to Millie, good grief we all know what she does for the rescue. This one was personal for her so I’ll let her tell the story.
I got a call last week from my sister. A friend of ours (extended family you might say) had called her needing help for her brothers dog. You see, her mom had recently died leaving her father unable to take care of himself. They had decided that her brother would move in with him and take care of him. He brought his best friend with him, little Macy. Macy loved to sit in her brothers lap and cuddle whenever she could. They were all still struggling with the death of their mother and constant care of their father but things were settling down. Wednesday we got a call that the father had woken up and found his son/ her brother dead. Poor little Macy was in the room with him. Now the father will need to be moved again and there is no where for Macy to go. Our friend cannot keep her, she already has a couple dogs… one who wants to eat Macy.
Macy has been through a lot of turmoil these past months and is a little scared and confused but she still loves to be held and sit on your lap. I snuggled her some and she is a sweetheart. She would make a great companion for someone.
She is a 10 lb long haired Chihuahua about 8 1/2 yrs old.