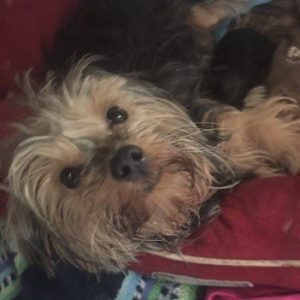 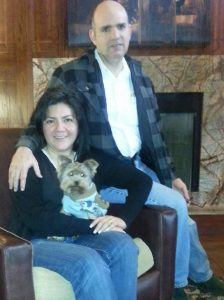 I set my sights on her at the auction once I knew we were going after mamas that were expecting babies in Mooies honor.
She was just a tiny little thing and only 11 months old, they had her back in the office in a crate at the auction house, (some compassion)
She was sweet and shivering and had a very big belly. She was advertised as being due in a couple of days.
I fought hard for her against other millers but I wasn’t going to lose and they could sense that once the battle ensued. I just stared at them right in their eyes telling them they might as well quit because I wasn’t going to.
She was the highest priced dog for the whole auction but I didn’t care.
I won the bid we drove her back to Texas and Dr Larsen came to pick her up the very next morning.
Amanda fostered her from day one and helped her deliver her pups just a few days later, the little male pup was born stillborn which was very upsetting for Amanda who worked so hard to try and bring him to breathe but it just wasn’t meant to be.
It was just Meg and Molly her little girl baby that Amanda cared for until she was old enough to be weaned.
Meg was then spayed when it was time and Dr Larsen discovered her uterus was already infected and she shuddered at what would have happened to her if she gave birth in a mill and nobody cared about her uterus not being healthy.
Today the life of motherhood and the mill is behind this very young little Yorkie.
She was adopted by the Villarino’s from Humble Texas.
Her name is most likely going to Joy and they are delighted.
They have no children so she is going to be spoiled and that’s precisely how it should be.
Have a very happy life filled with Joy ❤💕

Meg is an 11 month old Yorkie that had already been bred living in the mill. She gave birth to two puppies, one of them did not survive. She will raise her little girl pup Molly and then she will be spayed and will be placed in her new forever home when she’s ready.