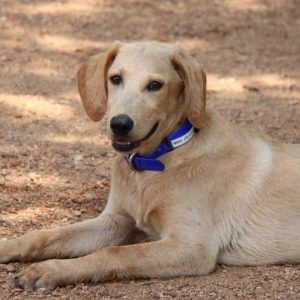 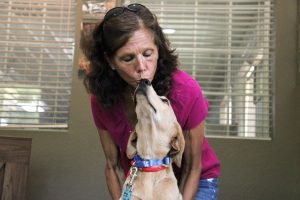 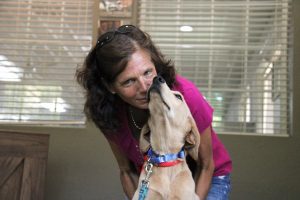 Mike Jackson is being adopted by Linda Bock from Elgin, IL. Linda recently lost her Dogue de Bordeaux at almost 10 years of age and decided she might like to try another breed and raise them from a puppy. She plans to take Mike on long walks and runs. Linda works from home so she will have the time necessary to finish house training and socializing her new pup.

She was trying hard to hold back tears, she was in love with him right away. He was a very good pup for them approaching slow and with lots of tail wags. They have a 14 hr drive back to Missouri and will be staying in a hotel for tonight. New name is Jackson because they like it and because Mike was named after Mike Jackson.

This is thinly male yellow Lab we were able to rescue, but he is a sibling to the chocolate boys. Once again we assume they are about 5 months old.

We are naming him Mike Jackson after an air rescue helicopter pilot in Tennessee.