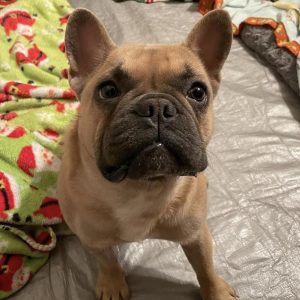 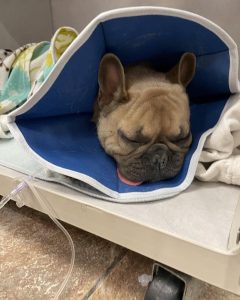 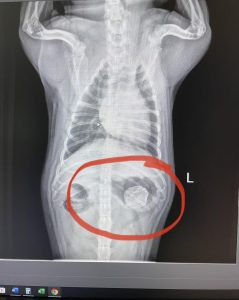 Once Mikey arrived at the ER they went to work on what was going on with him. We asked for X-rays of his whole body to get to the bottom of what had happened. We did see from the shelter paperwork that he had diarrhea when he came in, we also knew that he didn’t want to eat, swelling in his jaw and limping on a front leg we were worried about a potential broken jaw. Xrays showed no structural damage to his jaw, we are worried about a couple of his molars having some kind of trauma but oddly enough the biggest concern was his stomach. Dr Murray called me late last night and said he has a blockage in his stomach. Looks like a ball of some kind and he will not pass this. She asked for permission to take him to surgery and of course I said yes, they went in and removed it.
It’s no wonder he had diarrhea and didn’t want to eat.
He’s recovering now and is on plenty of pain meds for not only his surgery, but his painful jaw and leg too. We’ve had a few people email us saying he is their dog, this usually happens when we get a French Bulldog as a stray. If you think he’s your dog, send us all info you have including pics, documentation, microchip number, age, distinguishing marks, etc etc.
UPDATE
I’m very aware of the fact that Frenchies are stolen all the time so we are listening to anyone reaching out looking for a dog if theirs that went missing.
Mikey remains in the hospital and we are still trying to figure out what’s going on with him. He’s recovering from his surgery for obstruction but his jaw is painful, his tongue hangs out and the X-rays don’t show anything significant. We are now moving onto a consult with DVSC which are the orthopedic surgeons for more specific X-rays or perhaps a CT to see if there is a hairline fracture, or dislocation. We need a specialists eyes to give us more info. His mouth is still very painful and he doesn’t want you to open it. Xrays show swelling on his right rear limb and he limps on his right front limb. We wish he could tell us what happened, was he hit by a car ? was he kicked ? We just don’t know but we are going to do everything we can to find out. Mikey is running up a big tab as I’m sure you can imagine, we could use any help we can get with helping solve the mystery and find some relief for him. If you would like to donate to help Mikey you can do that here:

We got some answers about Mikey and it wasn’t anything we were all thinking of. We sent him in for a CT and the radiologist reported that his mandible has a slight twist could be a birth defect. The main muscle on his temple on the side that is affected is atrophied. They suspect an auto immune disease, this is the link to that:
https://vcahospitals.com/kno…/masticatory-myositis-in-dogs
They said it’s typically symmetrical and on both sides but it’s not for him. Some of them are chronic enough that they can have trouble opening their mouth. Our surgeon passed him to Dr Rolfe and he agreed this is what we are looking at. They pulled blood from him to send off to determine for sure. The treatment would be steroids, and they sent him home on those along with a lot of other meds. We asked Millie if she would take him as this is the kind of foster she shines with.
They told Millie when they checked him out he still doesn’t want anyone to touch his mouth, this condition is basically inflammation of the muscle so it hurts him. Millie said he circles to the right and obviously his tongue hangs out on that side. We are just beginning to try and solve this but obviously he is a complicated case, and all we can do is our best and see if he responds to this. A dog living in pain is not something we wil allow but that also doesn’t mean we won’t give it time to try and help him.
Millie will report more to us as she begins to care for him and hopefully we see some progress on his ability to be comfortable. It’s been a bit of a roller coaster ride for him to go to the ER with this jaw, find out he had a ball in his stomach, take him to surgery for that and then we end up needing a CT to get to the bottom of this issue with his head. He is a very expensive rescue, many of you have helped with donations but his bills have far exceeded what we raised. I will ask again to please send a little if you can, if enough of you donate a little bit it will get his expenses covered, if you can’t of course we understand, we want to give Mikey everything we can to find a quality of life for him.
UPDATE
I need to update you on Mikey, he has been a puzzle from the get go. Mikey was in a shelter with a very painful jaw and could not eat on his own, he ended up in the ER where it was discovered he had a blockage in his stomach and was taken to surgery for that. We then focused on his jaw, we sent him for a CT and the radiologist felt it was a muscle inflammation disease with the pain, and some muscle atrophy on his temple on that side as well as his tongue struggling some to function normally. We sent a blood test off to determine if he had that, it came back negative.
What that leaves us to feel is that Mikey suffered head trauma, no idea how but over time with lots of medications including prednisone he is feeling very good now. He eats well, and Millie tells me that he is a young boy, he is very, very playful and has no hesitation with his jaw anymore playing and shaking toys. Millie sees a little bit of a deficit in his eye sight on that right side, she sees him stumble very rarely on that same side. Millies vet Dr. Spencer has looked at him as well and feels like it is head trauma that he has suffered. We have no idea if that will improve or if he is permanently injured. He will soon be completing all of his medications including the prednisone and we will wait and see if he takes any steps backward and if he doesn’t we will be looking for a family who will love him in spite of any little deficits that he has.