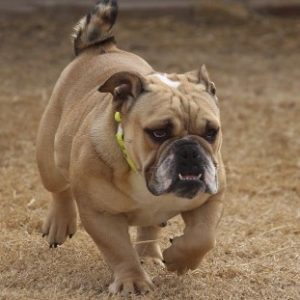 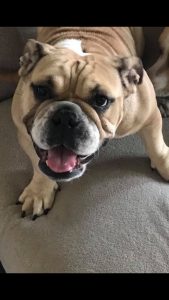 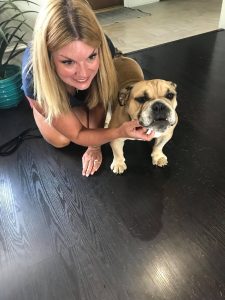 It’s funny sometimes how things turn out, you think you’ve got it right the first time and then you find out you don’t.

Mocha has been with us for such a very long time with so many complications the whole time being cared for by Aileen and Francisco in their home. They literally nursed her back from near death and of course they love her so very much.

A few days before Mocha was adopted out the first time to a veterinarian in Oklahoma we adopted out Bit O’ Honey, her new mama told us that a friend of hers was just a perfect home for her but we told her that Mocha’s home had already been chosen…It turns out that Mocha just couldn’t cope with the busy life he had and didn’t seem to care for the dog in the home, so she was returned and went back to live with Francisco and Aileen..

Laura then went back to the friend that was suggested and contacted her and she was ecstatic that Mocha had come back as she knew she was meant to be hers.

Her name is Leslie Foster from once again Oklahoma, this time Luther Oklahoma. Aileen has been in touch with her for months now as we waited anxiously for her to finish her final surgery with the hopes of their being no complications like we had with her in the past.

She came through with flying colors and today was the day for her to move on. Our hearts go out to Aileen and Francisco as we know they love her to the moon and back but Aileen said she’s 100% sure that this is who Mocha’s mama was meant to be.

We cannot thank them enough for taking such good care of our naughty deer tailed Bulldog, it’s been a long winding road with twists and turns but today was the last stop. Her mama is thrilled to take this sweet girl home and so are we.

She’s only 1 1/2 years old but she’s had a litter that’s already been weaned. She was advertised as having a litter of 8 pups but she didn’t have enough milk for them and they had to bottle feed her pups. That was what made me hopeful that she would be less desirable. They did brag that she doesn’t lay on her pups so they were hoping to brighten the story. She was the one and only English Bulldog in the auction and I made it one of my goals to get her out.
She was more than I wanted to pay but that was the story of the day. I didn’t care and fought for a bit with her before the opponent surrendered.
She’s a little Bulldog but never under estimate the naughtiness of a tiny Bulldog