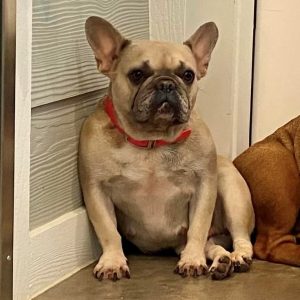 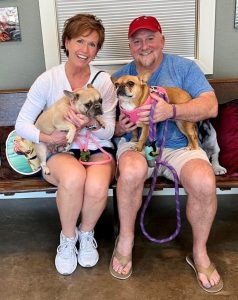 John and Anne Anthony of Plano, TX saw Monarch’s picture on the website and fell in love. They previously adopted Ivy fka Paula Kay, who was very shut down when she came to them, and had been contemplating expanding their family. Last summer, they reached out about adopting one of the Disney princess group Frenchies, but they’re Dogue Hank fell ill and they didn’t think it was the right time.
As they say, everything happens for a reason! Hank was diagnosed with an autoimmune disorder and is doing well, which meant it was time to revisit that expansion. Like so many of us, they saw Monarch and how terrified she was and their hearts broke for her. Her scared little face just spoke to them and, armed with the experience of working with a shut down mill mama, they knew they were hers. So, off they went to Anna to meet their girl, Ivy in tow.
John and Anne are big Cubs fans and have decided to change her name to Rizzo, in honor of Anthony Rizzo. They’ve already purchased a Serta dog bed and I have a feeling this girl will want for nothing.
Happy tails, Rizzo! We can’t wait to see you blossom!
About Monarch:
She came to us yesterday and is just absolutely terrified and sitting in a corner trying to understand what has happened, it will take time but I assure you we sill see her come to life and she will be a happy girl as a pet and not a commodity.
She was born on 9/1/19

We will be sending Monarch to a foster home. Sometimes they are too terrified to come out from hiding. 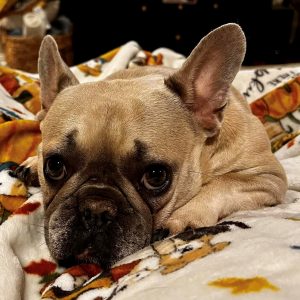