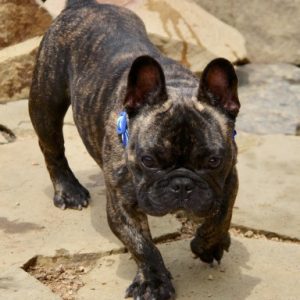 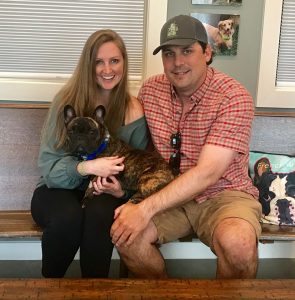 We sent Mr. Meanor off to his new life this morning, he will be going to live in Florida with Becky & Jonathan. When Becky saw the video of Mr. Meanor playing with Pinkie Earline she knew right away that he would be a good match for her Frenchie named Pig. Pig loves to play and wrestle and so does Mr. Meanor. He will also have a Beagle named Maddie to enjoy life with. We’ve discussed the situation of Mr. Meanor having prolapsed twice prior to coming into our rescue and how he has been stable since arriving. We hope that he remains stable and should he end up needing any treatment related to the prolapse repair we will be there to take care of that.

Becky used to be a police officer so Mr. Meanor will keep his name which we love, he knows that name and it’s adorable..

Let’s have a little chat about Mr. Meanor and get you updated on where we are today. He came to us with purse strings holding his rectum in that has prolapsed twice. We took him in for exam this week and his purse strings were removed as we know they have been there for a couple of weeks and they are a temporary solution to a problem that needs to be addressed.

We also know that he had staples in his belly and that he had a colopexy to supposedly correct the issue by his previous owner but he prolapsed again after that was done.

Dr. Reno noted on the previous vets paperwork that he had been diagnosed with a colonic intussusception and that was why they did the colopexy.

The colopexy is a procedure where they tack the colon down to the bottom of the abdominal wall to keep the rectum from prolapsing. Dr. Reno did not know if a colopexy is what he needed to have done for this condition, and she has told us that we need to get him into our surgeon as soon as possible to figure out what to do with him from here as she is sure that he will prolapse again.

Wes has him at his house and keeps him an eye on him at all times, he is never to poop unattended and if he begins to strain at all then Wes just tells him to come on and changes the subject to keep him from the urge that he has to do that. Thankfully he has had a pretty decent soft stool and not the bloody diarrhea he had when he first came to us.

We have him on a stool softener to make sure he doesn’t have any kind of struggle to poop and we are trying to keep it at a healthy soft stool, get your business done and move along.

We have an appointment for him on Tuesday morning to consult with the surgeons on what they think the options are for correcting this issue for Mr. Meanor.

In the meantime he is just being a very good boy, Wes said he’s just a chill little man who just likes good company and a good nap..