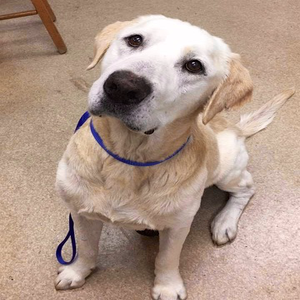 Mulder was very fortunate to be fostered by Laurie Romero who wanted to take care of him through all of what he has been and still needs to go through. He has had several surgeries to remove the cancerous mass that he carried on his abdomen area. When Laurie told us she wanted to foster to adopt this wonderful boy we were so grateful that no only did someone step up to adopt this old guy but to offer to care for him though it was just wonderful.

We hope and pray that the next surgery will be his last, there is just a bit left in one spot that’s not deep and one other spot that is right on the margin. Mulder is 11 years old but he’s in very good health otherwise and is just a great dog. 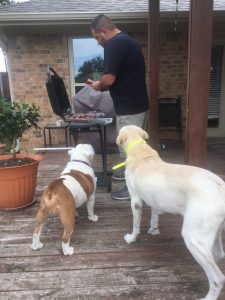 Mulder was one of two older dogs in terrible condition that were carelessly dropped off at a shelter.

We were able to tag them, and our new incredible volunteer Mary Jones who lives close to the shelter drove to pick both dogs up and brought them to the Ranch to begin their new lives.

Mulder is now gaining weight and enjoying much deserved love from his foster parents.