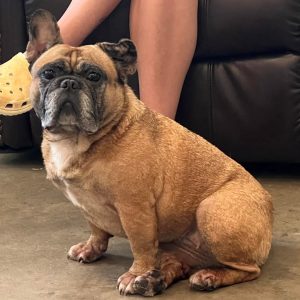 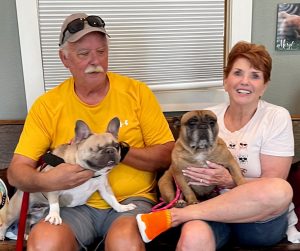 Nali Nali, Nalaaaaaa, Nalalalalala or, as you may know her, Nala is a sweet, silly, fun and good girl. An owner surrender, she came in sick with a perpetual ear infection, miserable from the pain of it. But she never complained. She didn’t grumble or fuss, rather she maintained her sweet temperament. After inner and outer ear removal, Nala was sent to live in a foster home where she thrived. She loved to wrestle and play bitey face with the other Frenchies in the home then snuggle up with the humans.
Jan and Larry Pairsh of Lakeway, TX are followers of the rescue and previous adopters of Bubba, also a French Bulldog. Bubba had a rough start in life but is living the dream now. And now Nala will too. Oh yeah, and Bubba only has one eye so, adding Nala and her one ear just made sense! Now, they’ll have a matching pair. Jan and Larry are retired and love to take their Airstream out on the road for camping trips. Bubba and Nala will tag along. They have lots of love to give and Nala will gladly receive it for the rest of her days.
Happy Tails, Nala! You’re a gem and we can’t wait to see you thriving in your forever home on the Happy Tails page.
About Nala:
This girl was born in 2015 and had a family that cannot afford any medical care for her and she needs medical care. She’s got skin issues, we are told she licks her feet constantly and as you can see her ear is in terrible shape and they were told she needed a TECA but that costs several thousand dollars and they just don’t have it. She lived with children and is a good girl but the family had to move in with other family and we simply cannot judge people for what life has thrown at them. Life is a struggle for all of us right now and some are having a much harder time than others.
Our job is to help the dog, get her healthy and find her a new family who can afford to care for her.

Nala’s ear removal has healed. Nala is a nice little girl but nobody applies for her, we can only assume it’s because of her ear, but I’m hoping you can look past that and see her for who she is rather than what’s missing.

This little one eared wonder Nala is such a good girl. She’s so so so sweet! Her poops are getting better so we’re going to start weening her off the GI food. We went for our walk this morning and Andy walked her. Usually I do, so I don’t get as good of a view of her. She walks perfectly. Plenty of slack in her lead and she stays right by your side. She’s a gem and is going to be such a great addition to anyone’s family.

Nala is recovering nicely from her Teca, I’m sure it feels much better to not have a chronic ear infection and masses in your ear. No surprise that she doesn’t have applications, we hope that changes but for now it hasn’t.

While we are talking about very big surgeries I need to update you about Nala. You remember she was an owner surrender with a very bad ear that would need to have a TECA. Last week she went in for surgery to basically remove her entire ear canal that was filled with masses and in a constant state of infection. The surgeon called me as he went into surgery with her to ask me what about the ear flap? Should we leave it or take it off, it was mostly cosmetic but her ear flap was filled scar tissue from hematoma after hematoma and her constant rubbing her ear on the ground due to the discomfort. There was a small chance that flap would continue to bother her so I made the decision to remove it leaving 0% of a chance of any problems with it in the future. We hope it won’t turn people away from wanting to adopt her, it’s just an ear flap but sometimes it matters to people. Nala has gone home to stay with foster mom Ana while she recovers from this very big surgery.

Hopefully she will feel a little better each day as she recovers..

This is a topic that I don’t think we’ve discussed before, but Nala is a good example of the problem. When she first came in the volunteers referred to her a “shadow chaser” she would constantly focus on shadows in the yard.
They sent me a video this morning when I could see the extent of the issue.
The subject is obsession and the dangers of it. Lots of people have dogs who they play with a laser pointer with and think the dog is having fun. The problem can exist with some dogs with balls or sticks or squeaky toys.
Some dogs obsess and in that obsession basically go “red” and what that means is they have lost the outside world and don’t hear or see anything else going on. You’ve heard of dogs going red with aggression but this is the same outcome only it’s with obsession. They get so fixated on what they are obsessed with and they just can’t stop.
When Nala is in the yard she becomes lost. She can’t hear you. She doesn’t see you. She can only focus on her obsession which is shadows in the yard. We have clients dogs that do this with sticks and I had a Schnauzer that did the same thing with a squeaky toy, I never let her have them.
It’s a very unhealthy thing to allow your dog to do. Nala has her biggest issue in the yard with arrival turf, so she’s being removed from that yard.
She is now going for walks during the day and she can potty that way and enjoy the outside. Her obsession doesn’t happen very much inside and the goal is to stop any obsession as soon as it’s seen by picking her up and changing the subject.

I’m convinced her previous owners played with a laser pointer with her which has created this level of obsession.

Nala was an owner surrender with this bad ear with masses in it and an infection that won’t clear. She will be having a TECA early next month which will relieve the suffering she’s endured for years. She’s an older girl who gets along well at the sanctuary, however she doesn’t have a home waiting for her. 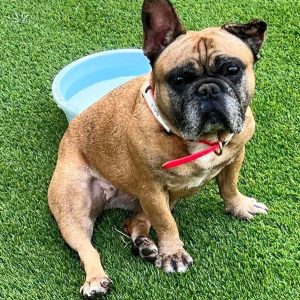 This is Nala, she is one of the many owner surrenders that we have taken in in the last few weeks. Nala has a terribly infected ear that doesn’t respond to treatment. Her owners surrendered her for this reason, and we gave it our best shot to see if the ear would respond without surgery but sadly it has not.
Nala will need a TECA. I am including the link to explain to people who don’t know what that means.
https://www.vscvets.com/…/total-ear-canal-ablation-teca
Nala has suffered with this painful ear for a very long time and this is the only thing that will cure this for her. Unfortunately it is an expensive surgery, but it has to be done. 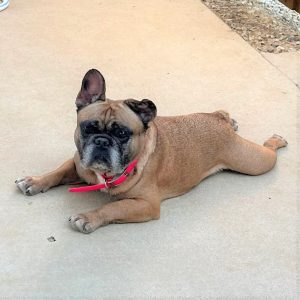