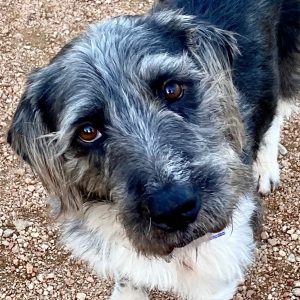 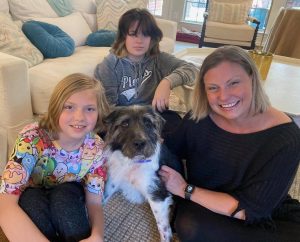 Nat King Cole came to us back in January from down in the Valley. He was so lethargic and depressed and we waited for the lights to come on. Little did we know what Nat had a tick borne illness called babesiosis. It has been a long journey for this special guy but we are so happy to say he has had two blood tests both come back negative for the illness and he is ready to announce his new family.
Andrea Ferguson is a volunteer at our Sanctuary and she fell in love with Nat and his sweet soul. Andrea and her two daughters have been fostering him for the past few weeks while we waited for his last blood test to be completed.
To see a dog like Nat in his condition when he came to us do a complete 180 has been an incredible experience. We are so grateful to the village for financially supporting this boy, he has been so sick, so many times and it took lots of funds to save his life.
He is such a sweet and sensitive boy and Andrea and her family have been showering him with lots of love. We love that he has two kiddos to call his own since we know he loves kids!
His new name is Finn and she will keep us updated on the happy tails page.
About Nat King Cole:
This terrier mix boy is very sad, very shut down and doesn’t respond to wanting to get up or move around. He has a long way to go socially. As we bathed him, he had a huge dog bite on the side of his face. Life in the shelter sometimes can be dangerous. We scrubbed it clean and drained what we could out of it, shaved it and started him on antibiotics and some pain meds. He will be first to see the vet tomorrow.
We hope to see the light come back on in his eyes sometime soon..

Nat King Cole is feeling great and so far is holding steady. New bloodwork in a few weeks to see if he still tests positive for Babesiosis. We are keeping our fingers crossed he doesn’t.

UPDATE 3/2/2021
An update from Christi on our sweet boy Nat
Another week with Nat has flown by! As you can tell he is quite comfy

no accidents in the house whatsoever. He loves meal time and gets a treat at bedtime so he now looks forward to that. He loves Wyatt and when he comes home from school he follows him all over the house. We started going on short walks and he does great on a leash. Nat is not a fan of TV and growls at newscasters or anyone that has a clear picture of their face. He feels they are intruders in his home

He also will not willingly get in the car, but once in, he will lay down and rest. He also thinks a bath is torture so we will work on that and make it a pleasant experience for him. We just love this Dude in so many ways. He loves people and just wags that tail all day long. He will make someone an amazing companion!

UPDATE 2/4/2021
Nat King Cole has really been a medical challenge that we have not ever seen before. Suddenly became very ill and rushed to emergency, the suspicion was Babesiosis from a tick, the blood panel was sent off but it took a week to get it back, in the meantime he was crashing and Dr. Bronstadt felt he was having an auto immune response and he needed to be put on cyclosporine and prednisone to try and get him back. so that is what we did and he did rebound. The tick panel them came back and it was in fact Babesiosis and we then had to retool on how to treat this disease.
This is by far a very uncommon thing our vets have seen here so Dr. Reno and Dr. Bronstadt put their heads together, found that the drug he needs is on back order until the end of the month so they had to go to alternative human drugs to try and get treatment going. One of them had to be compounded and the other is at the pharmacy here in town that I will go and pick up. He is now being removed from immune suppressant drugs and will be moved onto the tick born illness drugs.

The struggle is real, but we won’t give up until we solve it..

Nat King Cole is stable feeling much much better. His platelets are still too low but he was sent home on lots of medicine to see if we can continue to stabilize him. Evan’s syndrome is what the diagnosis appears to be and Dr. Bronstadt feels the tick bite probably sent him into the auto immune response causing the whole problem. He is on cyclosporine, and steroids and it will be quite a while before we know how it will all turn out, but for now he is feeling much better.

UPDATE 1/25/2021
The update on Nat this afternoon after Dr. Bronstadt has taken over is he thinks he may have Evans Syndrome but we won’t know until the lab work comes back tomorrow on the tick prognosis of Babesiosis. His spleen has come back to normal size but his platelets are terrible. He appears to perhaps have some kind of mass in his bladder but we won’t know more about that until tomorrow. If it is Evans syndrome which is an auto immune disease he would need to be started on Cyclosporine but we can’t do that until the testing on the tick born illness comes back. Regardless which one it is the prognosis of survival is about 50/50.

It’s just so sad to see him start to be happy and wag his tail and then get struck down like this.

Nat King Cole is not doing well. Laura spoke to the ER doctor and they are continuing his care but his platelets are dropping and he is anemic. Apparently a transfusion isn’t safe with this condition to they are working with antibiotics and steroids. We don’t know if he will pull through this, the diagnosis will be confirmed in a few days when labs come back so we are hoping it might be something else but we are very worried about him.

UPDATE 1/24/2021
Nat King Cole was doing so well, he is happy and wagging and looked like a new man.
Until last night, the volunteers found him lethargic and down and out, with a fever and feeling terrible.
We took him to the ER and he has been diagnosed with Babesia which is a new one for us. Babesia is a tick born disease that they see in Mexico and these dogs we rescue down near the border present to us many things we have no experice with. This is not contagious to tothers and comes from him having been bit and infected by ticks.
Here are some facts about this disease
Dogs infected with babesiosis may present with a wide variety of clinical signs ranging in severity from a sudden collapse with systemic shock, to a hemolytic crisis (the body attacks and destroys the red blood cells called hemolysis), to a subtle and slowly progressing infection with no apparent clinical signs. Dogs typically present with the acute, severe form of babesiosis, which is characterized by findings such as abnormally dark urine, fever, weakness, pale mucous membranes, depression, swollen lymph nodes, and an enlarged spleen. Blood and urine tests may reveal anemia, thrombocytopenia (low platelets), hypoalbuminemia (low albumin, a blood protein), and bilirubinuria (a pigment from breaking down red blood cells is found in the urine).
https://vcahospitals.com/know-your-pet/babesiosis-in-dogs

Nat King Cole is now hospitlized and we are waiting for an update on how he is doing but we are worried about him. These dogs from the valley are just in such terrible shape, we are worried for so many of them in so many different ways.

We all saw him the first few days when he came in, frozen in fear, couldnt get up, couldn’t move because it was just too scary. I told the volunteers just be patient, give him time, he will come around..
Just a few days later,his tail is up, a light is on in his eyes..
He will be just fine. 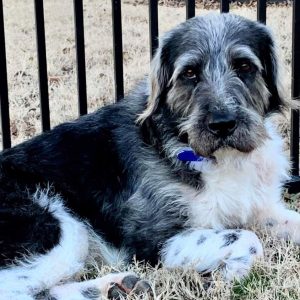 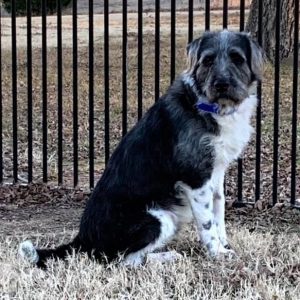