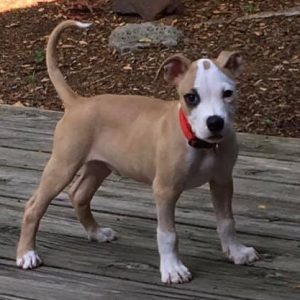 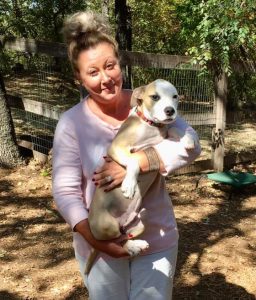 I just cannot emphasize enough to all of our village members the power that you have in your hands with just the share button. Lately when I’ve put out the call to please share one of our rescues the numbers have been absolutely phenomenal with many of them getting shared several thousand times. When that happens we typically always find the perfect home for the rescue that we are speaking about needing help with. Ollie was no different. The very same day that I asked for help Laura received many wonderful applications and chose this perfect family for the little guy and Millie facilitated his adoption at her home. thank you everyone for your continued help, it is awe inspiring and all of you are to be commended.
Millie:
The awesome power of the village went to work for Mr Ollie and because of the many shares he has found his forever home with Rachel and Jack Perry of Allen, TX. A friend knew they were looking, saw the post and sent it to them. They lost their English Bulldog (whom they loved dearly) awhile back and thought when they got another dog it would be one that could spend time outdoors with them walking, hiking and traveling. When they saw the post and read Ollie’s story they fell in love with him. Both Rachel and Jack have experience raising puppies. Jack is ex military and had pit bulls growing up and his family still has them. Ollie will be an only dog but will lead a very active lifestyle and I see lots of dog friends in his future. His name will remain Ollie because after all it fits him. I’ll see you on the Happy Tails page little man.. we’re all looking forward to watching you grow up.
About Ollie:

We never know where the next rescue will come from, but we have a team of doctors we work with and sometimes they call us to ask for help.

This pup came into the ER with Parvo, the family couldn’t afford his care and he would need to be euthanized. Dr. Scholl couldn’t look at this sweet pup wagging his little tail asking for help and euthanize him without trying.

She called Laura this morning to see if we could take him. Parvo dogs bring about a whole layer of risk in our foster homes and we knew the only one we would ask would be Millie, she is diligent and she is precise in her care, clear cut plan to isolate and keep things sanitized. Parvo is dangerous and nothing to take lightly.

Laura called her and asked if she would be willing to help and she said of course. Laura called Dr. Scholl back to tell her we would take him into our rescue and she was on the brink of crying and said now she will be able to sleep tonight.

Anyone who doesn’t think these vets put their heart and soul into their patients is just dead wrong.

This mornings update on how Ollie is doing:

Dr. Scholl called and Ollie spiked a 106 fever last night and his albumin dropped. She gave him plasma and an additional antibiotic. He had a lot of diarrhea blowing out and they had him beside her desk all night. She’s off work tonight, but the tech who’s been caring for him will be there with Dr. Murray. Dr. Scholl told the tech to be prepared for her to blow up her phone checking on him. She said he’s stable and resting with no fever now. but he’s refusing to eat anything.

If you could all send your thoughts and prayers he could use all the help he can get.

Lookie who is finally well enough to leave the hospital.

Ollie has had quite a few ups and downs, parvo is no joke, we do not take our rescues out of the hospital until we are 100% sure they are well enough to leave, he has struggled with needing plasma, terrible diarrhea, the biggest thing parvo dogs need is just support, fluids, and plasma if they need it. We gave him everything possible to save his life and thankfully we did.

Today his foster mom Millie went to pick him up and take him home. Laura described it as Ollie winning the lottery 4 times over, first of all he got Dr. Scholl at the ER who couldn’t euthanize this little guy and instead reached out for help from a rescue. Secondly he was rescued by Dog Ranch Rescue and it’s amazing village, third he got Millie as his foster mom, we don’t call her medical Millie for no reason, and finally he has Laura who will search high and low for the best family possible to adopt this little man and make his final destination last a life time.

It’s so hard not to snuggle him all the time but he is still contagious and we are being very careful. He is eating 3 x’s a day .. I’ve gradually added puppy kibble to his canned food and he’s eating like a champ. On Saturday his legs were wobbly but they are getting stronger each day. He goes out in a small designated area to pee, poop and walk around a little for a short time then he comes in and gets wiped off.. he does really well for such a young guy and only uses the pee pads occasionally. He sleeps quietly through the night for me and is learning to sit for a treat which is just too adorable for words. The first few days he mostly slept and ate but just recently he has started playing with his toys. The last two days he has had solid poops which is really good news for this little parvo puppy. We’ll keep you posted on his progress.

UPDATE 9/28/2020
Ollie the little pup who survived parvo has been returned and we are looking for a new home for him. Sometimes a puppy can be a challenge and sometimes a puppy needs a good strong leader, and Ollie needs that and that’s what we will be looking for.
Millie has offered up some info about him:
Ollie is back at the ranch working on his manners. He is absolutely the sweetest little boy who occasionally gets an attitude when he doesn’t want to do something (think small child temper tantrum). We are working hard on this. He is also learning to back off the older dogs and give them a break once in awhile and take his treats very gently. This is very important because he has very sharp puppy teeth. Ollie sleeps all night in his crate and never has an accident.. he has the cutest ever yawn when he’s tired especially when I wake him up to go out one more time before bed. This is his favorite cuddle time. He has a lot of energy and plays most of the day.. he needs supervision because he likes to get into everything but is very good about taking an afternoon nap to give me a break. He knows the words “go potty” and goes right out when he gets up and does his business. His housebreaking is going well as long as he is taken out often. Loud noises or other dogs barking loudly make him nervous and he wants to stay close. He loves toys and sticks!!

Oliie being a good boy at the doctor getting his next set of shots. This little sick parvo boy has now grown to 21 lbs!!
We need applications for Ollie, he is about 3 months old I believe. He is all puppy and a little stubborn which isn’t one bit unusual or surprising. He needs a firm owner who sets rules and boundaries like his foster mom Millie who has been caring for him since day one. She loves this little man as did all of the staff at the ER when they called us begging us to save his life.
It’s time for him to have his own family now, is that you? could you help us find them?

Two months ago to the day this little man was taken to the ER with Parvo to be put to sleep. The hospital called us and asked if we would take him into the rescue and pay for his care. We did, and he was hospitalized for about a week and he was finally well enough to go home. Millie took him home to continue his recovery and he flourished.
Ollie was then adopted out and returned.
I’m going to stop right here and vent a little bit because I think it is very important for everyone to understand what happens to any dog that is returned. It doesn’t matter the reason and for Ollie I didn’t discuss the reason but it still didn’t matter.
A dog that is returned has a label put on it. All the interest this little face had when he was first brought in just vanishes into thin air. It’s almost as if you can hear the people turn away. Clearly the assumption is there is something about this dog that makes them risky to adopt. I never try and keep an issue a dog has under wraps, we can’t find the right home for a dog unless we put it out there what the problem is and no matter how difficult it might be we have to find a home that is willing to tackle whatever the problem is.
Ollie was 8 pounds and about 8 weeks old when he was taken into the rescue. He was adopted out when he was about 11 weeks old and well. The problem with him in the house was he is an overzealous pup and plays very hard, has very sharp teeth and is a stubborn little stinker. The family couldn’t handle him and returned him after Travis spoke with them on the phone and determined that was best.
We brought him to the ranch for a few hours so we could spend some time with him and we just didn’t see anything that we were worried about. Yep he’s a pup and yes he does play with his mouth but that’s what pups do. We didn’t call Bubbles the “baby shark” for no reason, as Mabel used to say all the time “She really bites”

Anyway, we sent Ollie back to Millies house, she did ask Travis for some guidance on corrections for him a couple of times, he corrected well, he does listen and Millie has had no issues with him that she is concerned with. He is a happy healthy pup that needs a home, but now we have the issue of applications for him that don’t qualify for a pup, or just aren’t a good fit.
Ollie is now 4 months old, he has already been neutered and is ready to find his way to his forever life. 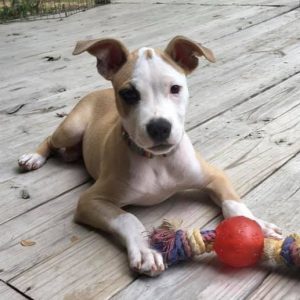 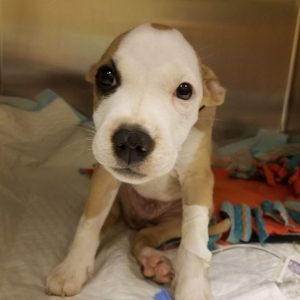 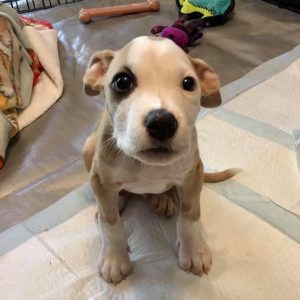 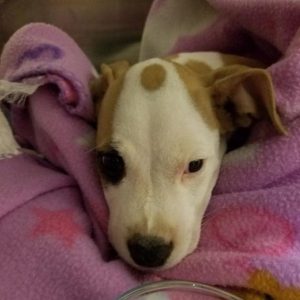