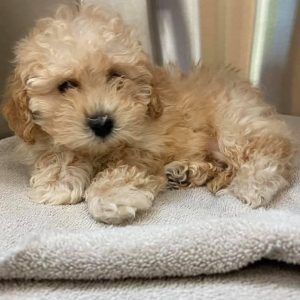 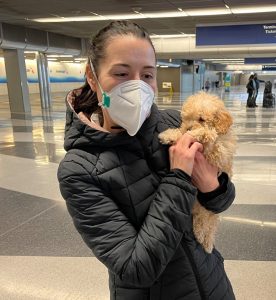 When we have a little pup like Oscar come into the rescue I’m sure you can imagine the inundation with applications. He’s adorable and he is a little pup so everyone wants him and that is exactly what happened.
You might remember Gabriella Uresti who used to live here in Texas and worked form San Antonio Pet’s Alive. We worked with her hand in hand on many of our rescues and she was the adopter of a Frenchie named Hambone. Her and her husband Carlos moved to the Chicago area a while back and we have now begun working with her on helping facilitate dogs that Dog Ranch Rescue pulls out of the shelters down in the valley and we pay for their transport up to Chicago where they have families on waiting lists to adopt dogs. A waiting list is not something that we have here in Texas so it gives us a very good option of helping dogs get out of the valley and moved up north into great homes that are hoping to be able to adopt..
We have done this a couple of times and plan to continue with the help of Raquel pulling dogs out in the valley and Gabriella coordinating their arrival. Gabby works for Heartland Animal Shelter in Northbrook Illinois and we also get help from Delia’s rescue which is Archangel Animal Network who handles the transport aspect of getting these dogs rescued and moved..
Gabby reached out to us about Oscar and asked if she could adopt him for her and her family. Gabby has paid the expenses with Ricky having a round trip flight escorting Oscar to her, and at the same time Ricky will now be able to stay in Chicago for a bit and visit his son Jon who lives there. All provided by Gabby, and Ricky deserves this kind of special trip. Ricky took off with him early this morning leaving DFW headed for Chicago where Gabby was waiting his arrival.
This little man will have a wonderful family of his own including a little girl and a caring loving mom who we have loved for a very long time.
Happy life little man, it started out pretty crappy to be abandoned at such a young age to the ER but that’s all changed now.
About Oscar:
Laura got a call late last night from one of the ER doctors that we work with asking if we could help this little pup. He is 7 weeks old and is reportedly half Maltese and half Poodle. His owner brought him in and said she’s had him a week and she said he makes her itch, he has diarrhea, (he tested negative for Parvo) she said he he is more than she can handle and was going to drop him at the shelter. I seriously can’t wrap my head around it. Obviously we said yes and told her to send the owner on her way and leave him behind.
Ricky once again braved the roads this morning covered in snow and went and picked him up, and drove him over to stay with Jenn.
We have named him Oscar and we assure you we will find him a home that will love him.
I told Laura to hold on to her hat with applications because there won’t be any shortage of them with this little pup.