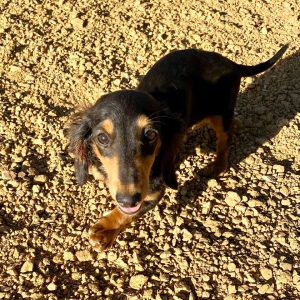 New Name:
Age: Puppy
Sex: Female
Breed: Dachshund
Weight: 5 pounds
Current Location: Carollton, Texas
Adoption Date: November 8, 2021
Adopted by: Carol Jansen
Latest Update:
I’m sure all of you remember this little girl Parade on the cage release last month. It has taken us a while to get to the bottom of what is wrong with her, scheduling an appointment with a neurologist and getting an MRI takes time and this was no exception with Parade.
I spoke with the neurologist last week and the MRI has shown that she has a malformation at the base of her skull where her spinal cord meets. What is happening is its pinching her spinal cord with the incorrect movement at the base of her skull. Parade will need surgery to try and repair this but we cannot do that until she is grown. Parade is only 6 months old now and will have to wait until she is 10 to 12 months of age and what they will do is go into that area and secure it with either pins and plates or sutures to keep this incorrect movement from taking place. In the meantime Parade will have to wear a brace that goes from the top of her neck to her shoulders, you see with this kind of movement it wouldn’t take much to have her make a moment that is too big such as wrestling and playing and damage to her spinal cord which could paralyze her or worse just flat out kill her. She will have to wear this brace for months keeping her safe and when the time is right she will have surgery that will hopefully solve this issue.
I would like to remind you that Parade was sold in this condition, she was sold as a dog that should be used for breeding her to make other Dachshund pups with Parade in this condition. Never for one second does what they are doing to these dogs become a concern, never should they worry about her being healthy enough to be a mother, never should they worry that any puppies she might have be born with the same condition that she has.
All of you that buy mill puppies at the pet store should always keep this in mind because the puppy that you are buying has the same lack of concern for any congenital defects when your puppy was sold to you..
Thankfully one of our volunteers named Carol Jansen fell in love with little Parade and she has adopted her knowing her problems, knowing the care that she will have to give her. The amount of money it will take to take care of Parade for all of this will cost between 10 and 12 thousand dollars after all is said and done. We thank the village for their support to continue to rescue these dogs that come from such dire circumstances. We thank Carol for offering her a life she would have never known before being rescued.
We will keep you informed in the months ahead on how Parade is doing, and hopefully we can bring her to a full and healthy life.
About Parade:

Her name is Parade

We don’t know yet what is wrong with Parade, but clearly she’s a special needs little girl. Our medical team is assessing information now and I’ll share with you what we learn going forward.