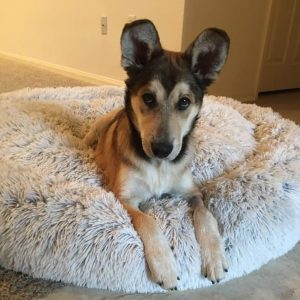 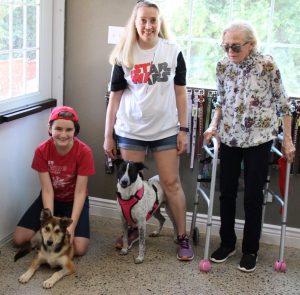 This was quite the adoption. You might remember when Parsons first came to us we were told he was a she. He was named after Peggy Parsons who is a nurse and a previous adopter.

Once we got him to the ER we were informed that she was a he. We quickly abbreviated his name down to just Parsons.

A few days ago we were contacted by none other than Peggy Parsons inquiring about adopting him. It turns out she previously had a three legged dog who looked very similar to this little man and she wasn’t going to ignore the signs.

Today Parsons met his mama Peggy Parsons and met his whole family for introductions. They are thinking of calling him Poe but I’m sure we will hear about that on the happy tails page.

This little man has won the lottery and will never suffer again the way he had in the early part of his life.

We were asked if we could help with this pup. Terry Hathaway was in a shelter down in Weslaco and a shelter attendant asked if she could find a rescue that focused on dogs that had medical conditions that they could help with. He showed her this pup with this leg that has been laying in the shelter since 5/13 with no ability to help him, the resources just aren’t there for shelters in communities like this. Terry reached out and asked us if we could help, of course we can help with the dog, but the problem is the transport, it is always the problem with transport.

Laura reached out to Sharleen Gaskamp who lives down there and has helped so many dogs for us in the past and she said yes I will help. Terry Hathaway pulled the pup out of the shelter and took him home and Sharleen went and picked him up this morning and is on the road with him now for the 18 hour round trip to get him to safety. Julie Schmader and her husband who have transported for us before will meet Sharleen near San Antonio and will drive him the rest of the way to our ER in Plano, TX.

I’ve shared the pics with Dr. Reno and she fears the pup’s leg is broken, Terry Hathaway said it smells very bad with infection so we are unsure if it can be saved. He will be dropped directly off with the ER team and will have him assessed by our surgeons as well to determine what he needs.

He will arrive later on this afternoon and I will update as soon as I know anything.

His name will be Parsons named after an RN who is a two time adopter with Dog Ranch Rescue.

Dr. Wilkins called me this morning to discuss Parsons and the news on his leg was not good at all. He had a compound fracture with the bone sticking out and it was shattered inside and simply not saveable. Dr. Wilkins operated on him this afternoon and has removed the leg and Parsons is now stable and doing well. Tomorrow he will go home with foster mom Leann to recover from this big surgery.

The good news is that he is a young pup and this is a back leg making the recovery prognosis very good. We are just so happy that we could help get him from the shelter in Weslaco and into surgery in less than 24 hours. Thank you Village for always being there to help support us and for giving the financial support needed to take care of big surgeries like this.

The ER called us yesterday to tell us that Parsons needed a blood transfusion so that’s what we had them do. The problem is he came into the ER with his ears full of ticks and he was covered with fleas. Our ER doesn’t see dogs like this that come from the valley so they didn’t have a stock of Nexgard, or Frontline plus. Yesterday I gathered a supply of them and Laura took them over to them to keep on hand for dogs like this that come out of the valley in this condition. They applied Frontline and it killed all of the fleas but the problem was he was covered with flea feces.

I asked his foster mom Leann to bring him by the ranch after she picked him up from the hospital today when he was released and I gave him a very careful bath, his incision stayed dry but as you can see when he was lathered it just turns to blood. You see fleas eat blood, so they poop blood that is what the black specks are you see from a dog that has fleas. When you get that black stuff wet it turns back to blood.

Parsons was covered in it from head to toe so he got scrubbed clean and his days of ever having fleas or ticks again are long gone.

I would guess that Parsons is about 5 or 6 months old looking at his teeth, most of his puppy teeth are gone and his adult canines are coming in now.

He weighs about 25 pounds right now and I would guess he will be about a 40 pound dog when full grown. He was a very good boy for his bath and is up on all 3 legs feeling pretty darn good about things now that ht broken stinky leg is gone.

He will do great as a three legged dog and I would imagine that he will be adopted very soon..

How about a little update on Parson from foster mom Leanne?

Leanne is a previous adopter of big boy Rudy.

“Parsons Puppy update – first 24 hours
Can you believe a 6 month old puppy and no potty accidents even with overnight and all the rain we had today! He’s not much of an eater except luckily for chicken pill pockets which makes all his meds so much easier. For now I am carrying him in/out for potty but he is walking around in yard when out and then gets tired. We now have all pills except 1 on the same 12 hour schedule. He lost a puppy tooth today while chewing on rope toy. I am keeping Rudy separate when I have Parsons out of the crate for now. He’s not too happy about that and is sulking a bit when behind the gate. Going to wait until Parsons is stronger before any interaction.”

Let’s have a little update on Parsons the little pup we rescued from way down in the valley with a compound fracture of his leg, unfortunately he had to suffer sitting in a shelter for a week with no care before we were able to rescue him and has his leg removed.

Dogs are so resilient and he hasn’t even blinked about it, three legs? that’s okay he will be just fine, he is up and moving around and will not look back.

Leann has written an update for us on how he is doing:

“Parsons puppy update
One week post surgery and the “little man” is walking around very well. Goes in/out to potty on his own now which is so much easier. (Still no potty accidents at all!) We have crate nap times but in between he is having fun exploring the living room. He immediately tried out all of Rudy’s beds and is working his way through the toys. Appetite seems to be improving as meds are finishing up. Only 3 more days left and we will be down to just one pain med which is good because he is not very cooperative on meds. He is leaving the incision alone so I am putting cone on only at night now. He cries when he is crated and left alone when we leave for walk or just leave the room and at night. I lifted him to couch for first time tonight and he is enjoying it. Loves being rubbed and snuggling on blankets. Enjoy the pics. I will try to get some video of him walking this weekend”

Parsons will have his stitches out in a week or so and we will most likely move him to the Ranch to give him lots of social experience with other dogs and lots of people, we don’t have anyone interested in adopting this pup so far. He’s a great dog that needs a home. 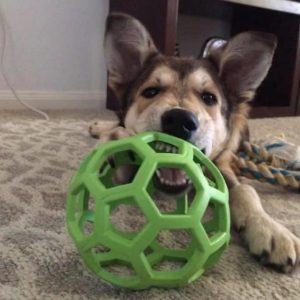 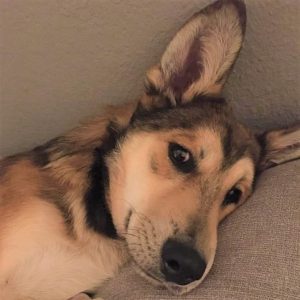 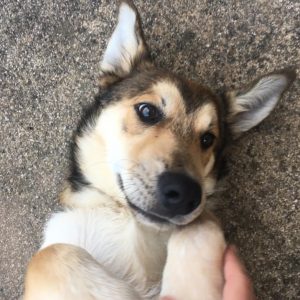 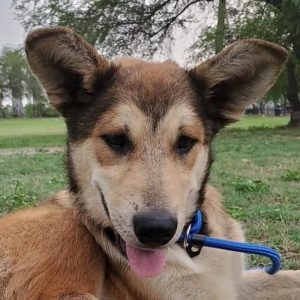