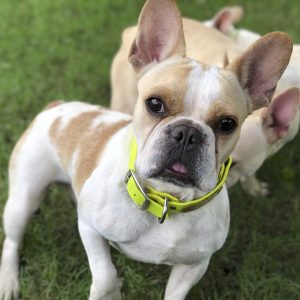 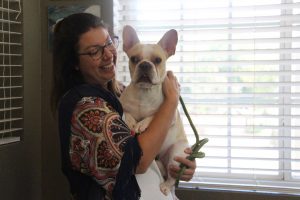 Piccolo Pete will be going to live in Denver, Colorado with Anne DiNiro. Anne told us in her application that she was a special needs teacher and the tremors that Pete has experienced did not make her hesitate at all. She is looking forward to taking Pete for walks in a huge park near her home and having him get to know her cat, Athena. His new name is Mucho, Mucho DinNiro, awesome name!

We wish you a happy, healthy life, Mucho!

Piccolo Pete was examined today by neurologist Dr. Ducote at Center for Veterinary Specialities and all of the videos that Julie shot of him having his episodes were examined as well as him having a full neurological workup.

The diagnosis is that Piccolo Pete has idiopathic head tremors. The word idiopathic means “unknown” why they have these. They vary from dog to dog on how often, how long they last and the severity of them. They cause no harm to him and the experts don’t know why they have them.

He’s a normal healthy dog but this is what he does, the majority of time when he has one you can offer him a bite of food, doesn’t matter what it is, just something for him to smell and he stops.

I asked Dr. Ducote if he was cleared to be adopted and she said absolutely, he is a normal dog who just has these episodes sometimes that are not caused by any kind of illness or neurological problem. These are not seizures and she said its rare if they respond to medication which he is on. She said leave him on the meds for another week or so and if there is no change in his episodes then just discontinue.

We are accepting applications again for Piccolo Pete, we are looking for an only dog home for him, he has been a bit of a butt with some other dogs, no matter if they are male or female he just sometime is a butt. He’s not aggressive and has been at the Ranch without incident but he has demonstrated this behavior with Julie and with foster mom Trish so we aren’t going to set him up to fail in a home.

He’s great with cats and he is an extremely affectionate dog who loves people and would like it if you held him all day long.

If Pete sounds like a match for you go ahead and fill out an application at dogranchrescue.com