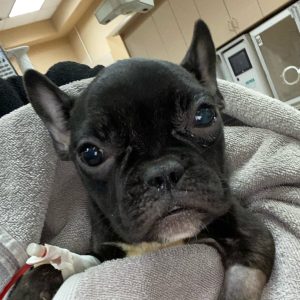 Available for Adoption Soon
Age: Puppy
Breed: French Bulldog
Sex: Female
Weight: 9 pounds
Kids: Not Tested
Cats: Not Tested
Dogs:
Fenced Yard:
Location: Anna, Texas
Special Needs:
About Pill Bug:
A peculiar story that we are still trying to figure out. Last night someone from Blue Pearl a vet hospital we use sometimes called us to tell us a Good Samaritan picked up this Frenchie off the street that is emaciated and dehydrated. They were looking for a rescue to take her so that she wouldn’t have to be sent to a shelter. Ricky and Terrie went and picked her up and we had them drive her to our ER that we use regularly to hospitalize her and see what might be going on with her.
She’s having trouble staying warm, she’s skin and bones and she just looks like she feels terrible. Obviously the hospital is where she needs to be and we thank Ricky and Terrie for running to get her quickly. I will update when we know more about her condition.

For now we just call her little Pill Bug.

UPDATE 9/16/2022
She is just too cute, Millie said she is doing well, eating well and getting a little personality now that she is feeling better.
She looks like she is made with a little bit of magic sauce..

UPDATE 9/10/2022
Millie sending us an update on little Pill Bug:
Little Pill Bug …..
All I can say is OMG !
Her pictures don’t show how really small she is.. just tiny. She’s settling in well and already knows I’m her food momma!
It just breaks my heart what she must have gone through.. her little feet/pads have sores on them and the nails are discolored from urine and feces. She’s older than we originally thought… maybe a year or two. That’s still to be determined. She’s got a mouth full of teeth with some tarter build up.
Pill Bug is gaining weight.. she’s now at 7.8 lbs from the 6.4 when I got her and is starting to have a little stomach on her. I was feeding her 4 times a day but i’ve gone down to 3 times a day starting today.
Her medicine seems to have gotten the worms under control (which I look for each time) but also makes her poop more. She sleeps quietly all night in her crate.. one side has pee pads down and she’ll get up during the night and use them. During the day she’s been out in her pen area.
She’s feeling better and starting to play with some of the toys.. I find them all around her area .. in and out of her crate so I know she’s playing. She gives lots of kisses and loves to snuggle! (She can be a wiggle butt especially if you want to get a picture so I’ve just done a photo dump of some I’ve gotten.)
Pill Bug does have an issue with her left eye and is getting medicine for that 3 times a day. She’s really good about letting me put it in.

I wonder every day how this sweet little bitty girl could have found herself on the side of the road. Unthinkable!!

Dr Rolfe took over on Pill Bug today he ran some bile acid tests to see if her liver is functioning normally. He said she has worms crawling out of her butt so clearly she’s infested with them. I had Millie snap me a photo of her teeth because her age continues to be a question. Clearly she doesn’t have any puppy teeth the pic is a little blurry but these teeth are adult teeth. Dr Rolfe puts her as a young adult, dogs get all of their adult teeth around 6 to 8 months old. Pill Bug weighs a giant whopping 6 pounds so you can see why there is confusion. 8 month old Frenchies don’t weigh 6 pounds but this one does. I’ve still got questions about where she came from, she’s been neglected for a long time and would have died if it continued much longer. She is in the hands of Millie now and that’s just about the best place she could land to recover.

UPDATE 9/4/2022
I asked Dr. Murray to please send us photos of Pill Bug’s body condition so we could understand how bad it is. I’m trying to wrap my head around how a little Frenchie ends up on the street, emaciated and sick. She wouldn’t have lasted long out there being dehydrated in the heat outside..
Good grief, what in the world…

The good news is Dr. Murray said her bloodwork continues to improve with supportive care, she eats everything in sight and the entire staff is in love with this little baby girl…

UPDATE 9/3/2022
Little Pill bug is now in the care of Dr. Murray at the ER she said she’s doing much better. We needed to give her a blood transfusion and we may need to give her some plasma too, her albumin is low and they will be monitoring that. We are suspicious of a liver shunt but with the holiday we cannot get a test on her ammonia levels with Idexx until Tuesday. this little girl will remain in the hospital until we figure things out diagnostically.
Dr. Murry is happy that she is eating and drinking well and looking much better than she did when she came in. They are estimating that she is about 3 months old and she was scanned for a microchip but none was found.