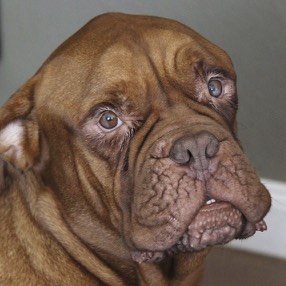 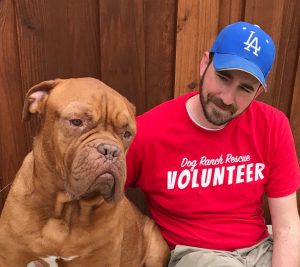 Quite honestly it was love at first sight and I mean right at the first picture he saw of him. I found Travis in the office staring at Ray’s picture that volunteer Chandra, in Tennessee, sent of him when she picked him up from the shelter.
I walked in the room and asked him what he was looking at, and he had this strange grin on his face. I said you’re in-love with him already aren’t you? He just laughed and shrugged it off.

When Ray arrived in Texas he was sick, emaciated, heart worm positive and the worst enropian I had seen. Travis happened to be out of town but Bryan came over to say hello and took him for a walk. Bryan was smitten too, and I knew these two guys were in trouble.
When Travis came back in town he took him home and started trying to get his health back, and it was obvious that he was never going to leave. He’s the quietest most delicate Bordeaux I have ever known. Travis said he’s like a baby deer, just a gentle, sweet soul who never deserved to be treated so badly and then tied to the gate of the shelter abandoned.
His name is well, just Sweet Baby…That’s what Travis calls him, and that’s what he responds to, so I would like to say to this sweet boy have a very happy life at the house of red bears, Sweet Baby. ❤️

Ray was rescued from a shelter in Tennessee where he had been tied outside the shelter to the gate. Ray is emaciated, heart worm positive, and needs entropian surgery on both eyes.

He is a very sweet precious boy who is very quiet and shy. Vetting is underway…