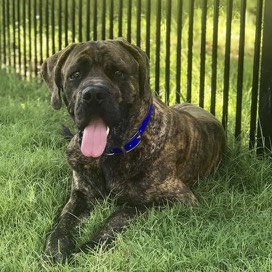 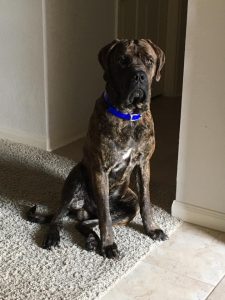 I’m going to close the night with the story of a rescue that we have been working on for the past 24 hours. We were contacted by Romaine Kobilsek who works very hard with rescue in Arkansas and Missouri and has worked with us multiple times in the past. She became aware of this 11 month old English Mastiff who was in urgent danger of losing his life and needed a rescue asap.

Let me explain the story, he belonged to an elderly couple who don’t have many resources and the man is very ill with cancer and had just had it with this big ol pup. It seems that the grandkids love him, the woman loves him, but he has done some bad things, he’s 120 pounds, he’s housebroken, he knows sit and lay down but he has been a very destructive boy in his home and he destroyed the very sick mans rocking chair that belonged to his grandmother, along with many other things in the home. The man has had it with the big ol pup and we were told that he would be taken to the farm this weekend and would be shot.

We had the same reaction when we heard that…. and we leapt into action to see if we could get all of the information, if we could pull together a plan and see if we could get this big boy to safety. Laura spoke to the woman and she was very upset about having to get him into a rescue but knew that her ailing husband couldn’t tolerate him any longer. You see sometimes people are in desperate situations, it’s real easy to judge people but it’s easier to just try and have a little compassion for all involved and that’s the way we choose to look at it.

We had a few obstacles knowing this big boy was 6 hours away in Missouri but we also heard there was a problem with transporting him. In a car we are told he will push his way into the drivers lap where he wants to sit like like a little Poodle, so transporting him was going to require two people to keep our driver from potentially crashing with a 120 Mastiff trying to get on their lap. We asked about tethering him in the car and we were warned not to do that. When you go into this kind of situation whether its true or not true you better be prepared and take necessary precautions.

With that information Laura went to the transport page asking for someone who could make the whole trip and last night we got an offer from Brie Smith and Shannon Thompson who live here in the DFW area to drive there this morning, pick him up and turn around and drive him right back to us. The two women had never met each other before but they met up at the sanctuary and took off on a road trip to rescue a big Mastiff pup.

He was picked up this afternoon with a tearful woman saying goodbye to him but knowing that her husband needed to come first and we assured her that we would take good care of him, and find him a home that would be perfect for him.

He is on his way back now and won’t arrive until late tonight where we will put him up for the night in the sanctuary, Travis will head over there in the morning to assess him and figure out if we can send him to a foster home, or if he needs to come stay at the Ranch.

Either way we will figure it out and we are happy to help this family, and this dog.