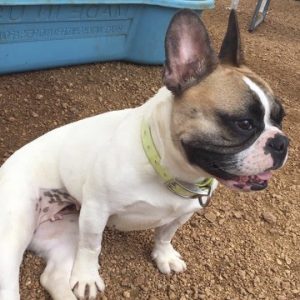 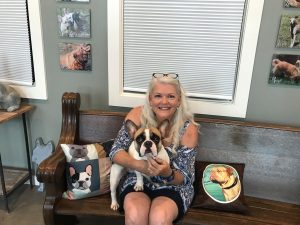 Our sweet girl Redwood is all healed now from her nightmare in the mill after being sewn up for a prolapsed vulva she didn’t have. Those days are long behind her now and she will live up in the Texas Panhandle with her new mama, Kim Diseker from Dumas Texas.

Her new name will be Persephone Blanche, but she will just go by Blanche. She will enjoy nightly walks and playing with her English Bulldog brother, Walter.

Kim says that Redwood will be the goddess of the house.

She’s 1.5 years old and it said in the catalog she had a prolapsed vulva. We had no intentions of her being sold to another mill owner with her vulva stitched together with plans of them breeding her again in her life. We took her directly to the ER once we got home and just when I thought I’d seen every low thing a mill owner will do, this girl came along.

The next morning, specialist Dr. Thompson told me that Redwood doesn’t have a prolapsed vulva but instead she has hormonal vaginal hyperplasia which means lots and lots of swelling due to not being spayed and her hormones out of control. I asked her why would she be stitched together? and she said she wasn’t sure, it made no sense, but then I explained to her that many of these mill owners do procedures on their own to save money, and they obviously thought she had a prolapsed vulva so they sewed it shut. I could tell she was a little perplexed, but I let her know a little about the world of puppy mills and it was pretty clear that this is what they did to Redwood.

She said I’m taking her to surgery and spaying her which is what she needs to put a stop to the hormonal hyperplasia and she called me when she was out of surgery and she said she’s doing well, she did have a pretty severe swelling due to this but she’s only a year old and she felt in 30 to 45 days all of this swelling would go away now that she’s spayed and has no more hormones compounding it.