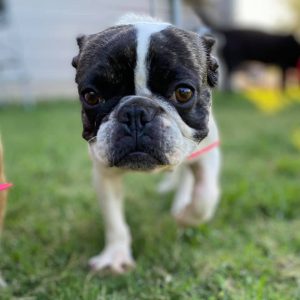 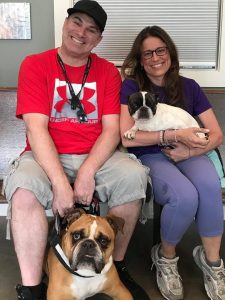 Rhiannon was adopted by the Buchanan family from Plano, Texas. The have a rescued English/American bulldog named Mac. They recently lost their English bulldog who was 11 years old named Coach and were ready to open their hearts to another rescue. Rhiannon was the lucky girl. She will be their first frenchie and they’ve already got her crate, bed and toys set to welcome her home. Rhiannon will be named Esther and they will call her Essie for short. Essie curled right up and snuggled them and was a very happy girl.

About Rhiannon:
We were only successful with three Frenchies this time and this girl was one of the lucky ones.
she was born on 10/1/17
Formerly # 171

When I met this little Frenchie Rhiannon last Sunday opening the doors for the cage release video, she had her back to the door, her head down and frozen in place. I helped her out and she could hardly move. Terrified, no experience with being social and free to run loose. I’m happy to report that one week later she is doing so much better, happy and saying hello to everyone.