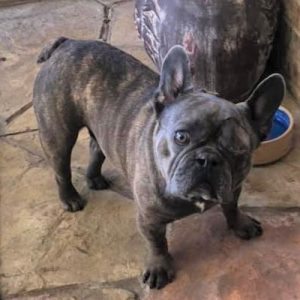 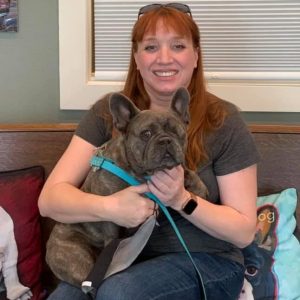 It took us quite sometime to get Rocky’s health under control, he was an owner surrender with his eye having burst from horrible inner ear infections causing him to not be able to blink and tilt his head.
Our volunteers Diane and Sharon both fostered this sweet boy helping us to get him well again.
Today Rocky has hit the jackpot. He will be going to live with Laura Prater from Lee’s Summit, Missouri came to take Rocky home. She is a previous adopter and has Halo/Hansen and Taylor. She was in love with Rocky from the first picture! and she has waited and waited for him to be well enough to finally go home with her. Her son is a history buff and they think he will be named after Edward Thatch better known as Blackbeard. She posts on happy tails and will keep us updated on his new life.
Happy life everyone

About Rocky:
We went to work on rescuing this boy yesterday. I’m not going into a lot of details because ultimately it doesn’t matter. What matters is that we are very sad we couldn’t get to him sooner and even though we rushed him to the ER it was too late to save his eye. All we know is it was an infected ulcer that didn’t get the kind of care he needed and by the time we came on the scene it was too late and his eye perforated and it was gone. The amount of pain is just awful and he was displaying symptoms of drooling, head tilting and partial facial paralysis that we are unsure right now exactly what all is going on. We hospitalized him in the ER overnight last night and the doctors at the Eye Institute removed his eye today removing all of the horrific pain he has endured. We will tackle all of the other issues once this nightmare is past him. He’s as sweet as can be, only 2 years old and is now in our care where we will make sure every issue is addressed.

You might remember that Rocky was an owner surrender who was losing his eye with it rupturing due to an ulcer that wasn’t managed. The eye was immediately removed as it burst the day we secured him.
The story doesn’t end there though. We did get his medical records and Dr. Reno looked through them with great detail and she could see a few things. First of all Rocky had neuro symptoms, facial paralysis, and a head tilt. His records showed an ear infection but nothing was seen when he was examined by Dr. Reno. She then told us that he might have lost his eye due to the neuro symptoms, if he was unable to blink the eye dries up, creates ulcers and before you know if the eye is injured and ultimately lost which is what happened to him.
Did he still have facial paralysis? it was pretty hard to tell now that the eye was gone because the blink response is the key to knowing. His head tilt was still there and we felt like even though he seemed healthy otherwise a neurology consult would be wise.
Yesterday that is where he went and the neurologist felt that Rocky has an inner ear infection that has caused the whole thing. We sent him off for an MRI and it was conclusive that this is exactly what was happening, now you need to understand with an ear infection like Rocky has there is no sign of an ear infection by looking at his ears, or doing an ear cytology. What is happening is way far down inside his ear drum.
The neurologist called Laura yesterday after his MRI and told us that Rocky has a very severe inner ear infection that is very close to his spine and near his brain and this is very dangerous. We are now moving him to the care of dermatology where they will quickly get him in for a myringotomy which is a procedure where they cut open the ear drum to find the infection and clean it all out. If it has burst already then they will work on cleaning it all out of there.
They told us that he will need to be on antibiotics for around 3 months and his head tilt may improve, but it also might always be there.

Rocky did well during his surgery and was picked up yesterday afternoon, he was having a lot of stress at the sanctuary so one of our volunteers Diane took him home to help him relax and settle a little bit. He’s been through a lot and he needs a quiet home to relax in to make him feel better.