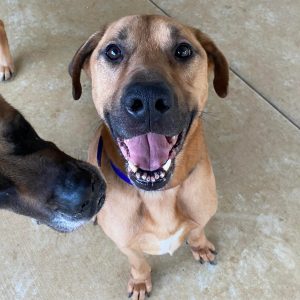 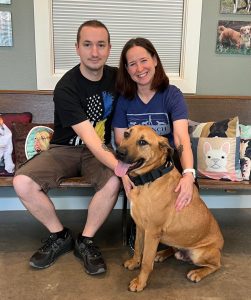 Today is Roger’s adoption day!
A recent application for him came through with the following poem:
From the moment I saw Roger, he wouldn’t leave my mind.
I gave it lots of thought, I gave it lots of time.
But every day, I’d hear his voice, calling out for me.
So in my heart of hearts I know it’s truly meant to be.
Cherokee said if I don’t apply I’d just sit and fret.
Then he asked me why I hadn’t submitted my app yet.
So here I am applying for the boy that should be mine.
Here is his forever home until the end of time.
How could we say no to that?
Cherokee and Delzy Lovejoie made the trip up to Anna from Gonzales, LA to bring this sweet boy home to join their pack. Delzy is a volunteer with DRR and a stay at home dog mom and Cherokee works from home, so Roger will have plenty of attention throughout the day. Having fostered for DRR, they know that it takes time and patience to help a rescue adjust to a new home so this couldn’t have been a better fit.
Roger will have four fur siblings to meet when he gets back to Louisiana. He will live with 2 cats, I.N.K. and Linus, a French Bulldog named Izzy, and a Blackmouth Cur Mix named Roxy. Cherokee and Delzy were looking for a playmate for Roxy and Roger fit the bill.
They haven’t decided on a name yet so we will look forward to hearing what they decide on when they update us on the Happy Tails Page.
Happy life sweet boy!
About Roger:
We were notified yesterday of a very sad situation that has occurred here in Texas with a rescuer that works with many large-breed rescue groups having passed away at his property. In his care at the time were over 50 dogs who had been without food or water for about a week with his passing. Liz Robles of Cane Corso rescue immediately mobilized her network of friends, volunteers and other rescue groups like us to get to these dogs immediately and begin triage. We found out that there was a 10-year-old female Dogue de Bordeaux named Miley Moo that was in the home with this rescuer when he passed, and she was alive and needed to be rescued. We were told that she was a very sweet girl and of course we said that we would help with her. We knew that there were many other dogs in need on the property and if we could help with another couple of them then we would be happy to do so. This morning Travis and Ricky made the trip down to meet with Liz on the property and were so happy to meet this old girl and Travis texted us that she was a wild and silly girl! She is overweight despite the last week of no food, and it is suspected that she may have a thyroid issue so we will get Dr. Reno on that Monday. In addition to Miley Moo, Travis and Ricky took in an older English Mastiff girl and a neutered, mixed breed boy who I will introduce separately.
Travis and Ricky also agreed to take this healthy, neutered and very sweet mixed-breed male. He didn’t have a name so Ricky has decided we shall call him Roger.

We are so happy to welcome him to the Ranch!

Sometimes in rescue you get lucky, and come across a dog who just “gets it.” Meet Roger. This sweet man was added on to the small group that was taken in this week from a local rescuers home who had unfortunately passed away, leaving 50 dogs on the property in need of help. You may sometimes hear us refer to dogs as having “Gem” status, or having Halo on their head. These terms are not thrown around lightly, and as people who deal with 100’s of different dogs on a weekly basis, and thousands in a year, most do not hold the title. We care for them all, but sometimes one just stands out as being really special. Roger is one of these kinds of dogs. He’s just happy to be. Need someone to lay by you as you do the dishes? Roger is your guy. A walking companion? Backyard lounger? Movie date? That’s Roger. I got to spend some one on one time with him this morning as the other two dogs from his group are at the vet today, and this guy is just magic. He’s not overly interested in toys, he’d rather just hold your hand or sit pretty for a yummy treat of your choice. He seems like a dog that’s seen it all, nothing really phases him. And even though his past is unknown to us, we promise to give him a future that he deserves. If you’re looking for a mellow, adult dog with a sunny disposition, please consider adding Roger to your roster. 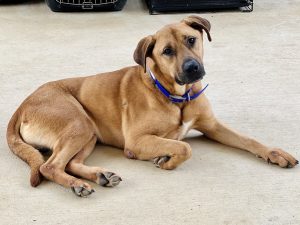