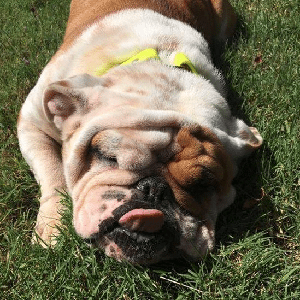 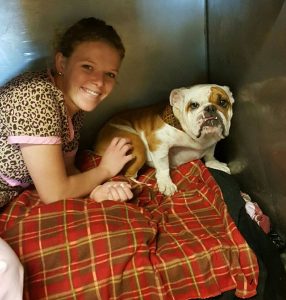 The very last of our Soda group finally moved on to her forever home. Root Beer was such a big medical mess, and such a shy girl that she needed a lot of help getting over her suffering in the mill.
Root Beer had palate surgery, she had tail amputation and she recovered at Dr. Larsens office where one of her tech’s Lori Frank cared for her day in and day out.
Lori fell in love with Root Beer and wanted to adopt her once she was officially well and ready to go.
Yesterday was the big day and we are so happy for both of them.
Happy life sweet girl

Root Beer has been in our care for nearly two months to try and restore her health. Covered in skin infection, ear mites and an upper respiratory infection, she also had such an inverted screw tail that was terribly infected that we struggled to clear it up.

We finally got her skin well enough to spay her but her tail infection would never clear, and we knew that she had to have a tail amputation.

She was also so throaty and noisy with her palate that it was obvious that her palate had to be trimmed as well. Yesterday she had nearly 2 inches of palate removed that was so long it was hanging down her throat. At the same time Dr. Turner removed her tail so that this situation could be completely resolved.

She is recovering at Dr. D’s until tomorrow when she will be driven out to Dr. Larsen who will foster her and keep a close eye on her during her recovery process.

Root Beer’s owners have been patiently waiting for this incredibly sweet shy girl to finally be able to go home.

In just a couple of weeks when stitches will be removed and that day can’t come soon enough for Root Beer.