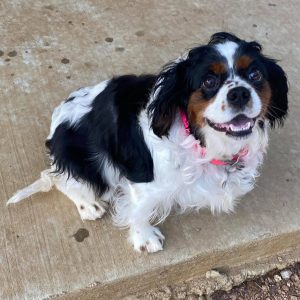 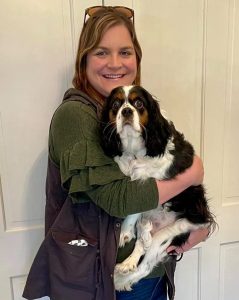 This was a very big surprise. Dr. Wilkins called me last week after he examined as she completed her first knee surgery. He said she looked great and he wouldn’t advise us doing the other side, she’s getting around really well and she has no pain. Of course if a problem develops down the road we will of course take care of it. So with that news Millie called her mama who has been waiting for a long time for her and gave her the good news.
Here’s Millie:
Rosanna was adopted today by Karen O’Brien and Matthew Kent from San Antonio, TX.
We thought Rosanna would need surgery on her left knee but when she went in for her recheck with the surgeon he was very pleased. He really felt that while working on the right knee her left knee had also strengthened and improved to the point that surgery on the knee was not in her best interest. She’s happy, getting around really well and not showing any pain.
Karen and Matthew had been waiting patiently for Rosanna to be well enough to be adopted and Karen drove up to get her this morning (Matthew was on call and waiting at home with the rest of their crew). They previously adopted DRR Lessie (now Coco) and Jelly (now Minnie). Rosanna will also have 3 other 4 legged brothers and sisters to keep her company. Karen works from home which will help in her adjustment into the family dynamics. Karen and Matthew are committed to loving and caring for all their dogs, no matter their personality or needs. This is the most perfect family for our Rosanna (new name to be Willow Rose). Love you my big eyed girl can’t wait to see you on the Happy Tails page!
About Rosanna:
I’ll start with this girl because her face tells the tale of the lives they come from, the eyes are the window to their soul and her is filled with fear and sadness. When I hear people say that buying dogs at auction isn’t real rescue this is the kind of face I see and I want to pummel people for saying such things. If these dogs don’t deserve to be rescued then I don’t want to be a rescuer.
Let’s all wait and watch her lights come on and show her what life for a lovely dog like her should be.
She was born on 12/13/16
Formerly # 155

Welcome to your new life Rosanna

Rosanna starts the long process of getting her knees operated on beginning tomorrow. It will be a long haul, first one knee and the recovery of that one before having to operate on the second knee operated on.

We finally had the consult with Dr. Wilkins the surgeon about fixing Rosanna’s legs. She has grade 3 luxating patellas and will require surgery on both of them to keep her knees in place and stop them from slipping around.
This will be a very, very long process, she will have surgery on one first and will need to be rehabilitated for 12 weeks with physical therapy. Once the one side has recovered she then has to go back for surgery on the other side and the same process begins all over again for 12 more weeks. Foster mom Millie of course will be the medical foster needed to care for Rosanna and she will be doing this for the next 6 months so this is a very long process to get her healthy and walking for the first time with no pain.
I do want to remind you that Rosanna was sold at a puppy mill auction with the most likely result of her being sold from one mill owner to another mill owner continuing the process of breeding her and producing puppies with the genetic likelihood of this problem being passed on again and again. They simply do not care, not even a little bit, that a dog like Rosanna should never and I mean never be bred but that just isn’t the case…

Thankfully she won the lottery that day and our anonymous bidder was able to rescue her, now her body will be repaired and her life will never be the same again.

Rosanna is walking better just by allowing her the freedom to run around. She will most likely still need surgery on her knees. She’s got an appt with our surgeons at the end of the month, but in the meantime she looks much better from when she first arrived. 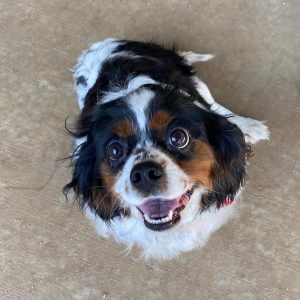 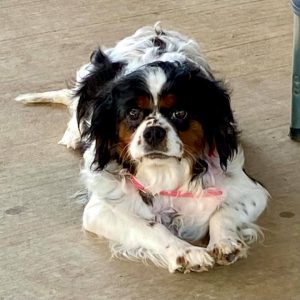