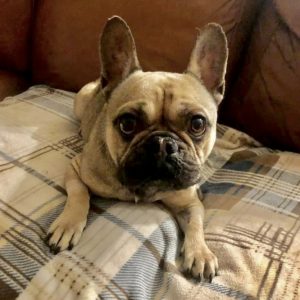 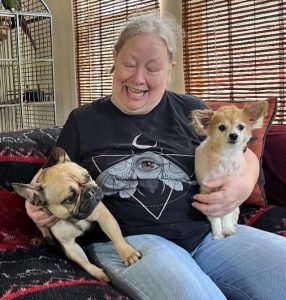 About 4 months ago we were asked by a family if we could help this Frenchie named Roscoe. His rectum had completely prolapsed and they had no finances to save his life.
He was rushed to the ER and quite frankly we had little hope that he could be helped. His rectum was so dry and so swollen we didn’t know if the surgeons could get it back in.
They worked on him and thankfully they managed it and he remained hospitalized for a while. Foster mom Amy PK took it from there and off he went to live at her house.
Roscoe is one of those dogs that we just decided from the get go that he was going on a raw diet, no if’s and’s or buts. We’ve seen this enough times to know that a raw diet is just how we are going to approach this and he was immediately placed on our raw food from the ranch. He has never had a single problem with his rectum again.
But Roscoe is a quirky guy and he would need a very specific home. He had lived in a home with lots of active kids and we could clearly see that was a point of agitation for him and he would work himself up to wanting to bite kids with that kind of energy. Remember what we always explain, dogs need and want balance and Roscoe wasn’t getting that and we are sure it affected his mind and his digestive tract.
He had few applications even though he is an adorable French Bulldog but his behavior needed a very particular home.
Anne Johnson from Dallas, Texas wanted to give him a home and she was fully approved with all of our requirements so off he went. We intended to wait to make sure it was a good fit and that was weeks and weeks ago and all is well. She loves Roscoe and he loves her. It’s just him and his mama, no excited kids, just his mom and a couple of parrots and one dog sibling.
So life is good and Roscoe is settled and we can now wish them all a long happy life together.
About Roscoe:
We had to fly into emergency mode with this little boy. Owner contacted us needing help, her life is just too complicated right now and she is unable to care for his needs any longer. He prolapsed last month and it continues to happen so she truly needed to surrender him to get him the help he needs and will probably continue to need. He is 2 years old and his name is Roscoe and Ricky is rushing him to the ER now.

I will update when I know more.

UPDATE 3/7/2022
This is Roscoe and I’m sure you remember his first few days with the rescue with a huge prolapsed rectum that we weren’t sure we would be able to get back in and save his life.
Roscoe has done very well. He is staying with foster mom Amy and her pack of dogs including Grandma who has taken a liking to him. Roscoe has some quirky spurts of excited energy so Travis went to Amy’s house to give her some pointers on helping him be a good citizen and so far he is doing very well. We will not place Roscoe in a home with children due to this quirkiness and his response to very unexpected wild behavior that kids can have. He has not had any issues with Amy’s dogs and we think he might like a stay at home or work from home mom or dad but we will look at applications with other scenarios.

He is an adorable little man, and we are ready to look for those applications.

UPDATE 2/10/2022
Roscoe has left the hospital and is now being foster by Amy PK at her home. She sent us a little update on how he is doing:
Rosco is here and doing well. He is a tiny thing with a HUGE personality. I learned very quickly that containing this dog when I’m not home is a challenge.  He can open doors

. I couldn’t figure out how he was doing it, until I put a camera in the room and watched him jump up and grab the handle with his teeth. This is no accident, he knows what he’s doing.  He also can flat-foot jump a baby gate. I have a baby gate that would work for a great Dane and this dog can get over it.    I’ve never seen anything like it. I now leave him in my master bathroom reinforced  with a baby gate, the door closed and a huge heavy antique trunk propped in front of the door so he can’t get out. He doesn’t have separation anxiety. Nope….He’s just stubborn. He has been a little growly with my other dogs, so I have not done full introductions with everybody as of yet. I am doing the “Grandma protocol” and feel confident it will all work out

So far it looks like his surgery was successful. He’s a sweet happy little boy. He loves Gabby, and enjoys our morning car rides when I drop her off at school. The entire car line waves to him as we go by. He loves it.

I wanted to give you an update on Roscoe. We continue to keep him in the hospital as he recovers. Dr Bronstadt called me yesterday to update me. He has some pretty serious diarrhea so they are working on that and trying to stabilize him. We are just taking it one day at a time as this surgery was a very difficult and painful one.

I spoke to Dr Wilkins this afternoon he said they did struggle to get Roscoes rectum back in, he said he soaked it in hypertonic solution and got it to reduce some more, and he pulled and the nurse that assisted pushed. Thankfully it is back inside his body and then a colopexy was performed to tack his colon to the belly wall to hopefully prevent this from happening again. He did put in a couple of purse strings on his anus just to give it as much support as possible while everything calms down. He will be able to poop with the purse strings but it will prevent his rectum from coming out if he pushed too hard He said he took a look at the walls of everything while he was in there and they look normal but he took a couple of biopsies anyway. They were looking for potential reasons why this happened such as IBD.
He told me that he will spend the night and maybe go home tomorrow, I said no, he is going to spend the weekend in the hospital, we aren’t taking any chances with him, and he said even better. He said if it doesn’t hold then the next step might be to go back in and do some resections but hopefully it doesn’t come to that.

All in all we are pretty grateful to have as much success as we have had today and we hope he continues to improve and his rectum stays on the inside where it belongs.

I spoke to Dr Wilkins one of our surgeons this morning about Roscoe. He said we have 2 options the first one is to open his abdomen up and try and pull it back in and he would have an assistant on the outside trying to push while he pulls hoping it doesn’t tear. Option B is amputation and he doesn’t like that option at all, too much risk for leaking and infection. I told him go for opening him up and try and get it in and do a Colopexy while in there. I said what happens if you can’t get it in, do you want to try amputation and he hesitated very much. I said understand that we are putting this in your hands if you can’t get it back in and you decide he needs to not be awakened we respect your decision. I asked him if you can get it back in do you stress that tissue has died and won’t do well. He said he thinks all of it is viable tissue it’s just very badly bruised.
So he is going into surgery now and we need you to send all of the hopes and prayers possible. 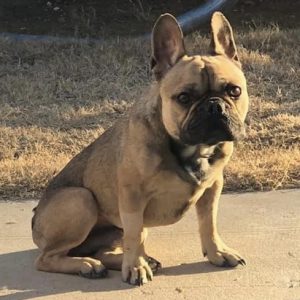 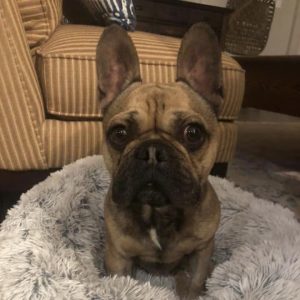