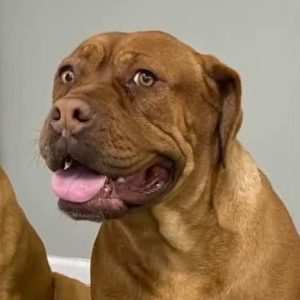 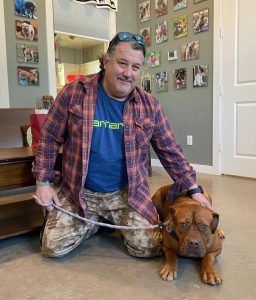 Today is the day for her next chapter in her book to be written as she said farewell to the sanctuary and hello to her new dad. She is going to be living with Catherine and Randy Hooper in Rio Rancho, New Mexico. The Hoopers have adopted four rescues from us, Jeff Goldblum, Teague, Mork and most recently, the tripod Doberman, Jace. They also have 5 other dogs in their pack so Ruby will have plenty of new faces to meet and play with and show her the ropes. They have 5 acres that the dogs can explore and run and well, be dogs! The only thing Ruby will need to figure out is who gives more love and better belly rubs, mom or dad?
The Hoopers are already on Happy Tails and will update us as Ruby settles in after their drive back to NM today. We know she will do so great and she leaves her old life behind her and now onto new adventures!
About Ruby:
These two girls are owner surrenders that arrived late last night. They are poster children for littermate syndrome. They are two year old sisters and were purchased at the age of 16 weeks from a “breeder” and they were the last two pups without a family. There are so many things wrong with this scenario and this topic will be the subject of our next podcast we record.
You see these two girls are shy, these two girls are sisters, and they are both shy, they both didn’t get the critical socialization they needed when they were very young, they were sold together and all they know is each other. The owners have kept them until now and then decided to give up. They aren’t friendly and wag their tails with their family, they are frightened and spooky and stick close to one another and therefore they lost their home.
There is much work to be done here first and foremost they will be observed, can they at all operate independently? or do they move together in unison as a unit? We refer to dogs like this as having two bodies and one mind never have they been able to make decisions independently of one another and its a damn shame.
The odds are high that they will be separated and I know the common thought will be concern and people will say you shouldn’t do that to them, that its sad and you need to keep them comfortable, but the fact is it’s the absolute best thing you can do for them, how can they grow, and become a more confident dog when they are “stuck” in this mental trap?

Ruby, has made such a change after breaking up the littermate syndrome brain her and her sister both struggled with.

She is happy and silly, and now she loves to wrestle and play with Big Bend.

Ruby is doing so much better everyday after being separated from her sister. You can see her mind working now on how to process things on her own and make her own choices. The best part is she follows and seeks out us humans looking for direction and leadership, that tells me she will continue to progress further with our help and will be a brand new girl in no time.

If we are sitting down in a chair or on the floor, Ruby will come and sit next to us and allow us to pet her. We are hoping soon that her worried face will be a thing of the past.

Let’s take a peek at Ruby on her third day without living with her sister. How about approaching people for a little smell, getting in the pond, asking to get on the chair, and take a look at her starting to play with other dogs..
This will only get better day by day…

Ruby is going to be a sweetheart. Not once has she lashed out bluffing at other dogs to get away from her now that her sister isn’t here anymore.

I will fill you in here on what we have seen from these two girls. First a little background, they are sisters, they just turned 2 years old. They were purchased by their previous family together at the age of 16 weeks.
Chili and Ruby are textbook littermate syndrome sisters and stood literally no chance of success with the family. There are many factors as to why that’s true,
A. both of these girls are very shy sensitive worried puppies.
B. both of these girls were together with the “breeder” for 16 weeks, offering them no socialization, experiences, with life, the world, other people, other dogs, and therefore the syndrome worsens. No reputable breeder would have ever placed these two girls in the same home, no legitimate breeder would have allowed their pups to get to 16 weeks of age without exposing them to a social life.
C. both of these girls were sold together to unsuspecting people who had no recognition of who these puppies were, the challenges they would face, the damage that was already done. They just thought they were taking home two sister pups, how could that go wrong? The family that welcomed them to their home had no idea what these girls needed, and as we discuss in the podcast these two girls even in my own home would be very difficult to reach, and rehabilitate because the sick bond was already too far gone.
These girls lost their family with the continued and escalating behavior of littermate syndrome, they reported that they had no relationship with them, they had no love for their family, they bluffed at the kids in the yard because they only have fear in unison, never the ability to trust and never the ability to think.
We spent the last few days observing them, would they make decisions as individuals? or would everything they do be in unison? every place one moves, the other follows, they are two dogs with one brain, they are unable to think on their own, they are frozen in littermate syndrome, afraid and lashing out and anything that approaches their intertwined sick minds. It turned out that they indeed only moved in unison.
We knew very soon that they have no chance at all of ever being normal dogs without separating them from each other allowing them to become two dogs with two brains, giving them the ability to blossom and become individual dogs.
Yesterday they went off to the vet to be spayed, I say went off as though that was easy, I assure you it was not. They are so terrified that walking on a leash is a very difficult thing to manage. I did get both of them to move with me and approach the parking lot. Ricky was out there with his truck and we figured out pretty quickly that we could not transport them this way. We loaded Chili in and tried to secure her while we brought Ruby out, the flailing and flipping ensued with Chili trying to climb out to get to her sister was dangerous. I took Ruby back in the building while Ricky went to get the bus with two large crates in it. Once he got there we loaded Chili into a crate, and then Ruby slowly came with me to the bus and loaded her into the second crate. When Ricky arrived at Dr. Reno’s the techs came out and carried the crates loaded with sister bears into the clinic to not risk losing them by opening the door.
You see every move they make is out of fear and panic, every move they make is out of desperation to just intertwine with each other trying to feel some kind of safety, but here’s the problem, it will never help them feel safe, it will only let them continue to be afraid together.
So both girls have been spayed. Ruby will come back to the Ranch to try and learn to be a dog and Chili will be going home with foster mom Ana who you might recall is Abrahams mom and the work she did with him gives her lots of understanding on what she will be working with when it comes to Chili.
Ana has been advised to take Chili home and leave her be, don’t ask anything of her, if she growls at you or shows her teeth she needs to be ignored, don’t try and pet her, don’t try to coax her, allow her the time to think and observe and then we wait, what will she do? will she move forward? will she follow another dog? will she follow Ana, or will she not move at all?
One step at a time, small little steps forward, allowing these girls to think for the first time in their lives, allow them to make choices, individual choices for the first time in their lives. That is what we will be doing.
People think it’s sad to separate them, we think nothing is sadder than the suffering from living in this hell of littermate syndrome. My hope is that they never see each other again, nothing good will ever come from that and any advances they make would disappear in an instant by being back together.
I will of course update you as we move forward on the progress we make with Ruby and Chili. 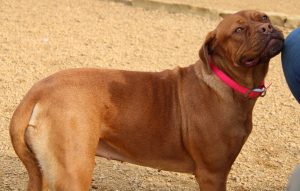