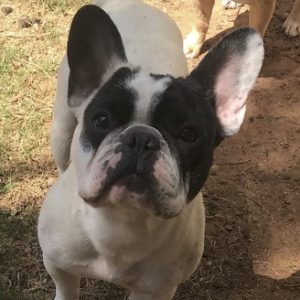 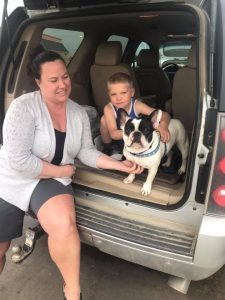 We had an adoption for Rufus yesterday in Oklahoma. Trish drove a few hours out to try and make the ride a little closer for his new family driving from Parshall, CO. Rufus is going to love life living on his Ranch in Colorado with the Miller family and getting to play with two children. Rufus met Trish’s neighbors and absolutely loves kids. He will also have a female English Bulldog to enjoy life with. His new name shall be Chief!

I have a little story to tell that I would like to share with you, it’s a story about helping people rehome their dogs and the problems that can arise from doing that. This story is about one of our foster moms and her friend who happens to be a village member and a previous adopter of ours.

There was a woman who was ill and needed to rehome her Frenchies, she started with one of them and our adopter helped take the female and found her a new home. She wasn’t ready to let fo of the male Frenchie yet but after a few weeks she was, and our adopter took him too. She didn’t have any luck placing him so she reached out to our foster mom.

Foster mom who fosters for other rescues besides ours had just placed one of her fosters with a gentleman I’ll call X unfortunately the dog “frightened” him and he had to return the dog after a few days, I don’t know what that means…..

Our foster mom did his home visit for this dog and everything looked good, his home and his vet reference was good so they allowed this man X to adopt the dog…

The dog had not been vetted so our adopter and foster mom took the dog to the vet and had him vetted, problem is they had no contract with X and when they took the dog to the vet they put all paperwork in the “owner X’s name although they paid the bills. Unfortunately the dog was HW positive which can run about 1,000 to treat..our adopter felt like she needed to take care of everything in the vetting process so she paid all of these bills herself and treated the dog..

So at this point the man X had paid nothing for the care of this dog, they had no contract with this man and they had paid all of the expenses associated with the dog, in addition they did pay for a microchip too, and this man X registered the dog to himself, and they made the mistake of making sure all the vet bills were in the man X’s name even though he paid nothing..

So the man took the dog home to have him, and let him recover from his HW treatment but he would continually call them and say the dog seems tired, he’s not pooping, or he doesn’t want to eat, and then he called and said the dog had blood in his stool and our adopter and foster mom paid to have additional fecals run to see if any parasites were missed. The fecal was 12.50 and the man said he didn’t have the money to pay for it..

All was negative so they then suggested that maybe he should take the dog to his own vet and see what he thinks, he did and he had a 250.00 bill which he paid…(the only one he ever paid) the vet recommended a low fiber diet and probiotics. Our adopter had experience with a dog with blood in their stool so she bought food and probiotics and took them to the man X and the dog, she paid for this herself..

The blood continued, and our foster mom suggested that she take the dog home with her and see if she could calm things down and help him through this, the man X agreed.

Five days later he called our foster mom and wanted his dog back, our foster mom told him she had taken the dog to her vet for observation, he apparently didn’t like this response so he called the microchip company that evening and reported the dog stolen.

He then moved over to the Fab Frenchie page and began ranting about how this woman had stolen his dog and wouldn’t give him back, telling everyone on this social media site that he was devastated and he loved his dog and she took him and wouldn’t give him back. He called her out by name and several other village members saw it and sent it to me, this was about 10:00 p.m. when I became aware of it. I went to look and sure enough he had a whole group of angry mobsters that didn’t have a clue what the real story was wanting to see justice served for this poor man who had this supposedly terrible woman steal his dog..

I contacted the admins of Fab Frenchies and in a few minutes he was removed from their page..I then reached out to our foster mom to ask her what was going on…

The next morning he showed up with the police department at our foster moms house demanding she return his stolen dog…she explained to the police that the dog was at the vet like she had told him and they left with the man X stating he would be pursuing her legally.

Our adopter and our foster mom just wanted what was best for the dog and the man X stated over and over that he didn’t have the money for vet expenses, for dog food, for the microchip, for a fecal.

Our adopter asked Laura and I what to do? We said look this is the mistake you made, you put in a microchip that he was allowed to register in his name, you took the dog to the vet and put the dog under his name even though you paid the bills. Everything on paper shows this dog is legally his…

Our foster mom contacted him again saying we just want this dog to be cared for properly and if you can’t afford to that then what will we do?

Here’s the kicker, he told them they could buy him from him for 400.00 and he would sign a bill of sale and allow them to change the microchip info…

So thats what they did, they met in a public place, exchanged the dog for cash and a bill of sale and he walked away…

So much for loving this dog so much, and this terrible woman who was trying to steal his dog that he loves dearly.

The moral of the story is be aware of what you’re getting yourself into, if you need to place a dog, work with a reputable rescue, make sure the I’s are dotted and the T’s are crossed because people can be nuts out there and this guy was one of them..

The dog is now in our care, under our rescue and I would like to introduce him to you now…