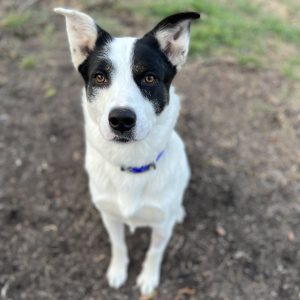 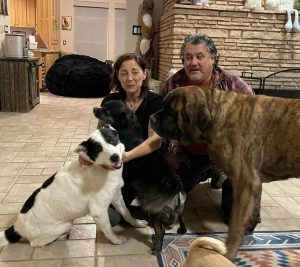 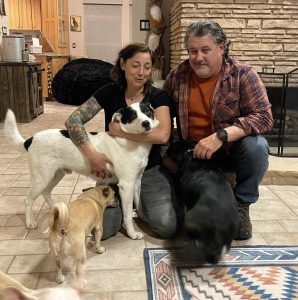 Well Saguaro went from the unwanted no applications ever came dog to the luckiest dog on the planet.
Randy and Catherine Hooper have adopted from us multiple times, big boy Mork, Jeff Goldblum, Teague, Ruby, and Jace. They just came to adopt Ruby and a few days later they lost one of their pack and said they would like to help another dog and asked us who was a good fit. Saguaro was the one we recommended and we then had the problem of Randy and Catherine unable to make the long trek from new Mexico, have no fear Mr. Ricky Barnes came to the rescue.
Saguaro has now landed in their home as a lottery winner. His new name will be Chico and the Hoopers have 5 fenced acres on their property for these dogs to have the time of their lives. We could not be happier for this boy who deserved to finally have a life filled with love and happiness.
We wish them all the best….
About Saguaro:
On January 1st 2022 he was driven to the shelter by his owners and dropped off as they drove away. Happy New Year dog, we don’t want you anymore. He is 3 years old and is a very chill dude, I walked him last night when he arrived and he was just such a pleasant thinking boy. His spots are adorable and I hope he gets lots of applications.

Welcome to your new life Saguaro 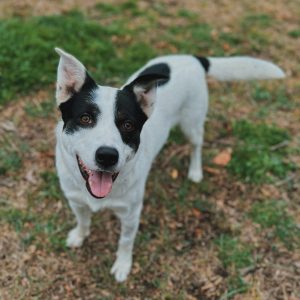 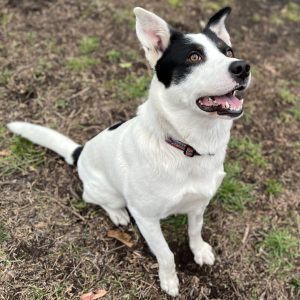 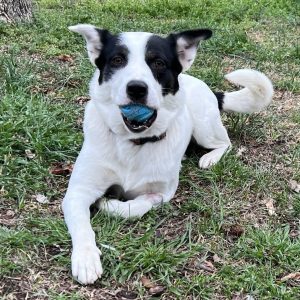 Saguaro day 5 update: He grows more and more comfortable in the house every day. He settles and sleeps well in his crate, and loves to chew a nylabone or benebone while he’s in there. He has a bit of FOMO if he’s in the crate while the other dogs are out in the house, but I like to rotate and give everyone time away from each other while we integrate him into my mini “pack”. He does amazing outside with everyone and to my ultimate surprise, is PERFECT with my wild child Shepherd, who I assumed he would not be a fan of. He continues to learn positive social cues and takes corrections well from the other dogs. He even romped around with the Bichon! I cannot stress how SOLID of a mind this dog has. He makes great decisions and while he has a super silly and funny side, he listens beautifully and wants to do the right thing. He is very very smart and I’m already trying to think of different brain games that we can do after he gets his Heartworm Treatment in a week and will need to take it easy. All in all he is a beautiful, smart, sweet dog that needs someone to be his bestest friend.

Emma has written a pretty informative bio on Saguaro for anyone who might be considering him for adoption.

This distinguished gentleman Saguaro has been at my house for a few days now. He is doing his very best to make good choices, and looks to me for lots of direction. He can be at the very back of the yard and will SPRINT to me if I whistle for him. He’s sleeping in his crate without issue but it’s not his favorite. Overall he has done really well with my dogs. The first day he was intermittently grumbly if they got too close when we were inside the house, but outside he’s done great 99% of the time. He ignores my 12 pound male dog who is quite rude if I’m being honest, so he gets some brownie points for that. He LOVES my female Shepherd, they are wild and silly together and have had 0 issues. He and my 6yo female Lab Mix have had words once, but it did not escalate which is good. He’s doing very well navigating the social scene here as all three of my dogs are very different, and he relaxes more every day. At first he was pretty nervous that someone was going to steal a toy that he was excited about, but that is getting better as time goes on, and he’s sharing well. This boy LOVES TOYS. Treats are fun too but his favorite thing (as all the volunteers who have worked with him know) is to get a toy and roll around on his back with it. He’s eating with my dogs and will take treats sitting right next to them. He has not had any nastiness when passing by my shepherd who’s crate is right by the back door. I think he is a perfectly adoptable boy who has a very good head on his shoulders. He is sensitive and initially has a bit of a nervous side, but he wants to please and as I said earlier, takes direction very very well. Now to find his HOME! 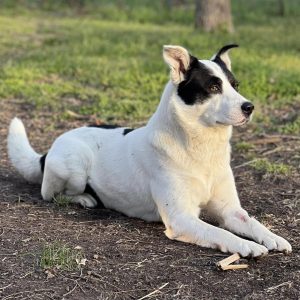 Emma took Saguaro home to her place with her dogs and reports that he is a perfect gentleman and doing great with her dogs. He was one of the worst cage fighters we had in the sanctuary and he now eats his food with Emma’s dog in a crate. He didn’t have a single thought of cage fighting with her and believe me when I say it that is a very good thing.

How on earth are there no applications for this boy Saguaro?
He’s just about the cutest thing playing with Wyatt, riding in the car for puppacinos and enjoying his plethora of new toys.
Here’s what Saguaro needs, he loves kids, he loves to play, he’s great on a leash he’s great in a car, he likes other dogs that are balanced, but does not like rude pushy male dogs.

We’ve got dogs that are bored and looking for something to do while waiting for families to adopt them, so the volunteers thought maybe we would have a little agility with a couple of them. Seguaro is very bright and would be an excellent dog to belong to someone who wants to utilize that mind.
He is looking for his forever family.

Emma told me she was headed to Starbucks to get everyone a hot chocolate because the damn temperature dropped down into the 30″s again today.
She said can I take Seguaro?
I said you can take him but only if he gets a puppacino and you take some photos of him that might find him his very own home.

Here they are, I think she did a pretty good job 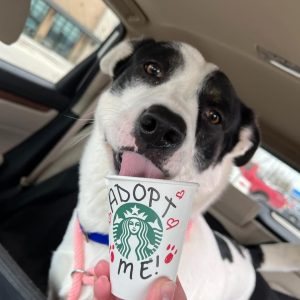 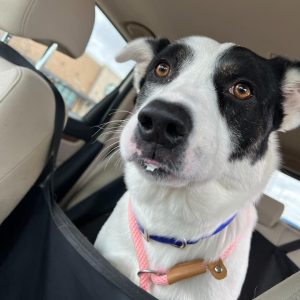 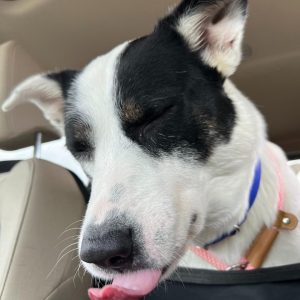 This is Saguaro and he is a very quiet boy. He is trying to learn about other dogs out here. He wants to play with some, but he then gets his nose bent out of shape with knuckleheads rushing him.