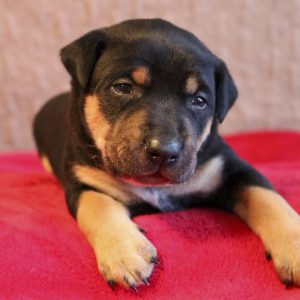 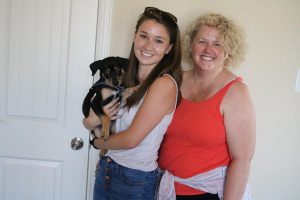 San Juan is flying off to Torrance, CA to be adopted by Alex Lim. Alex’s mom Bobbi started following the LSDR/DRR page a few months ago. She said as soon as she saw Rio’s pups she told Alex about them since Alex has been looking for a male Dobie mix for quite some time.

San Juan will have a chihuahua brother to play with who has the exact same black and brown markings as him. During the day while Alex is at work her mom will be on babysitting duty. Bobbi is looking forward to introducing her 2 cavaliers to San Juan as well. The entire family has been waiting patiently for this little man to be well and come home.

Alex and Bobbi spent a couple of hours hanging out at Maternity Manor getting to know San Juan. They had a few names picked out but after spending some time with him, they settled on Monty.

We got the family all set up on the Happy Tails page and I for one am excited to see Monty and his identical chihuahua brother playing together very soon! 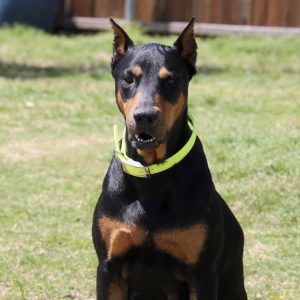 Rio is a purebred Doberman who was running on the streets in south Texas very pregnant and begging for food. She was rescued and brought to us and within 36 hours she delivered all of her puppies. We do not know what kind of mix these pups are but they appear to have blocky heads like a Pit Bull or Boxer. They are big pups and will be large dogs.