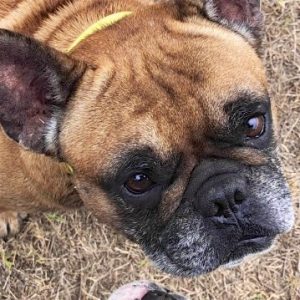 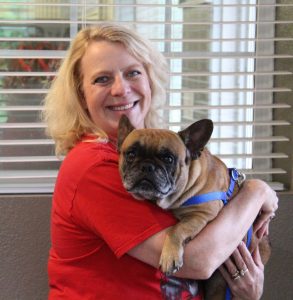 If at first you don’t succeed then you try again….

This time September will go live with our previous adoptive family Brian and Julie Holly from Luling, Texas who adopted our other senior Frenchie Jive, now known as Jarvis. September will have a dad that’s home with him all the time as he is retired after serving in Afghanistan. September didn’t do well in his first home we placed him in because he just couldn’t deal with being alone while his mom worked and had no other dogs. This time it’s completely opposite, a dad that’s home and plenty of dog friends.

September will now be known as Groot….and we are sure he will be a very happy man with his new family..

Update on September by Julie:

Mr. September is a big ol 29lb sweet, funny meathead. He’s a thick boy with a big beautiful, very soulful face with some grey on his mouth. He is doing very good with all the dogs and loves running around playing. I’ve not seen him have much interest in my cats unless one of the other dogs starts in with them and then sometimes he will join in. He does pretty good in his crate but can be very vocal in there sometimes. For house training, he still lifts his leg quite a bit inside so he will need focused continued work with that. I have not had a leash on him yet so I have no idea how he will react to that so work is needed there also. He has become very playful with me but from a distance most of the time where he’ll run up to my fingers and then back up, just being a goofy boy. When I do pick him up he just melts in my arms like butter. He loves his face being massaged and kisses and his booty scratched.

When he came to us he had a bacterial and yeast ear infection for which he is still being treated for with Mometamax and TrizUltra+Keto. He will be due for a recheck around 14 Aug.

He has some thinning of the hair likely due to the many fleas that were on him.

He has dry eye in both eyes for which he’s on 3 eyes meds (Neopolydex, Optixcare, and Tacrolimus).

For intestinal parasites, he was prescribed Droncit for tapeworms and Metronidazole and Panacur for giardia. He will be due for a fecal recheck around 25-30 Aug.

He was given his first dose of Heartguard and Nexguard. The next doses are due 8/26.

He has been examined, had all vaccines, neutered and microchipped.

The Rescue responded to a “surrender” of dogs by a backyard breeder in South Texas in July. These dogs were all roaming out on this man’s land, a man who is being charged and tried for animal abuse and neglect. Our wonderful transporters brought home this Month-themed group. The conditions of all of these dogs were appalling, pitiful. This sweet boy is no exception.

He is currently clean, safe and well-loved with us and soon he will be seen by Dr. D. Stay tuned for updates on this darling boy who is happy as a clam with his new life.

He’s 4-5 years old and his name is September!