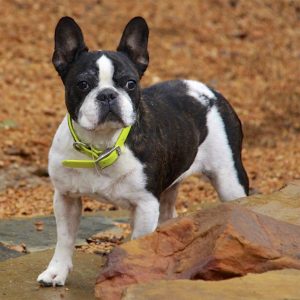 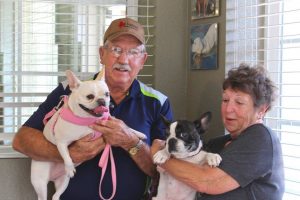 Jan and Homer Ralston from Knox City Texas adopted one of our senior Olympians Spitz back in May. Sadly after just a few short months he had a massive stroke and they had to say goodbye to him. We were so happy when they contacted us interested in once again not only adopting another senior, but a deaf one at that. Shirley was the lucky girl to be chosen by them and today she drove off with a family of her own, never having to share a lap with Laverne again 😂

They are unsure what her name will be but after all it doesn’t matter much anyhow because she cannot hear a thing, but who cares, she’s got love and good care and what else could she ever want. she has a sister named Rosie to spend her time with. This was one of those cases where there simply was no adoption fee, for people who are so generous to not only open their heart to one senior that they lost only to open their heart a second time we felt that was the most appropriate thing to do.

We became aware of this sweet Frenchie in a shelter with a mini Schnauzer, both surrendered from the same home. It looks like about 6 months ago their original owner died, and at that time his sister took them in. It’s obvious from her handwriting that she is elderly and must have not been able to care for them any longer. She didn’t know many specifics about the dogs including their age, but the vet assessed them as seniors.

It’s clear she has been neglected for some time. Her skin is a mess, and she has two big masses in her mouth that will need to be removed. She also seems to be deaf. She’s so sweet and loves to have a lap to curl up in, and she seems friendly with other dogs at the Rescue.

She is safe with us now and we will get her started on the path to better health.

Give a warm welcome to Shirley!

We’ve learned that Shirley, best guess, is she’s 8+ hard to know her age. Her skin is in rough shape from having many fleas for a very long time. Dr. D’s best guess is that shes most likely spayed already. She has a scar and she has no sign of having puppies or having come into heat multiple times.
Shirley is completely deaf and cannot hear a thing.
She has some pretty large masses in her mouth that will be operated on this Wednesday and sent off for biopsy. Other than that she needs good food and lots of baths and a good home who will take care of her for the rest of her days. She’s a sweet girl and gets along with all of the dogs. She is not bonded to Laverne and really don’t care that they are separated, both of them have lots of company with other dogs and do very well with all of them.