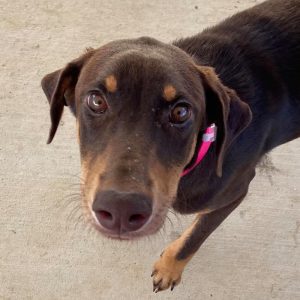 Available for Adoption Soon
Age: Puppy
Breed: Doberman Pinscher
Sex: Female
Weight: 35.3 pounds
Kids: Not Tested
Cats: Not Tested
Dogs: Good
Fenced Yard:
Location: Anna, Texas
Special Needs:
About Shuri:
We tagged this young girl a few days ago, she had a stray hold until today but nobody came. It looks like she’s got a bad hip, maybe been hit by a car its hard to know. She’s just a baby and we will get her taken care of as soon as we can.
Wes has named this one, I’ll let you guys tell me what its from.

Shuri has been moved to foster mom Carol’s house now that her surgery is finished, she will be taking care of her as she recovers and taking her for rehabilitation. Carol sent us this little update.

“Shuri did well with her FHO surgery. She stayed at the clinic last night and I picked her up late this afternoon. She has to wear the dreaded e-collar for 2 weeks and stay confined to her kennel except for potty breaks. In two weeks she will go to rehab to ensure her recovery is going as planned. DRR makes miracles happen for all of their dogs. Many thanks to the DRR team!

Shuri found herself as a stray in a shelter with a hip that was badly broken beyond repair. Shuri is just a pup and who knows how this happened, was she hit by a car? That’s most likely, but who knows. Yesterday Shuri was able to get the surgery she very much needed. Dr. Wilkins took her to surgery and said it was a gnarly mess in there, but he got it all cleaned out. She had an FHO which is removing the ball off of her hip so that she no longer has bone on bone grading inside causing terrible pain. Shuri will need a few weeks to rehab and when she’s well we will need to find her a home of her own.

Shuri was examined today by our surgeons and she will in fact need an FHO to repair her leg. That basically mens they remove the ball off of her hip to eliminate the pain she is having from it being kicked out of the socket in some way that we just don’t know about. She will have several weeks of recovery and rehab after the surgery is completed.

Shuri is a sweet little young girl only about 8 months old. Unfortunately, she’s got a bad hip. We don’t know if she’s been hit by a car, but that’s what we would suspect. We will be getting her in for a consult to DVSC as she is going to need surgery on that hip. More than likely an FHO where the ball of her hip bone will be removed freeing up the pain that she is having.