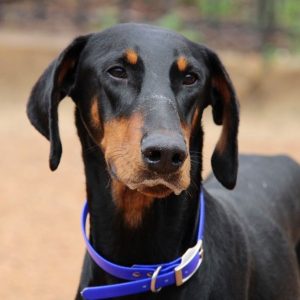 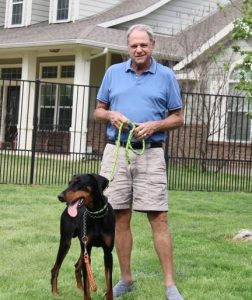 This was probably the most unconventional adoption we have ever had to do, but crazy times cause us to adjust.

Sir William Thatcher’s new dad is Rick Smith from Plano, Texas. Here was the issue, Rick was very recently in Cambodia and just barely got back after having to travel through many countries to get here and of course we weren’t going to go near him. We opted for putting Sir William in the lounge yard by himself and letting Rick just go into the yard alone and spend some time with him which he did and Sir William loved him and Rick loved Sir William. Rick has owned the Doberman breed before and recently lost his 14 year old dog a few months ago. After having owned the Doberman breed previously Rick is retired and excited to bring Sir William home and play ball with him and enjoy the pool together.

Once they had their meet and greet Wes took the camera from about 50 feet away and zoomed in on an adoption picture and off they went..

We wish them both a very happy life

While Wes was at Dallas Animal Services he went to evaluate this boy that we were also notified about. Once again how a dog behaves in a shelter setting can, and will cost them their life. He was listed as “rescue only” due to his behavior they cannot risk adopting him out to the public and him behave aggressively. We felt pretty confident that this behavior was due to fear but we have to go and evaluate this behavior for ourselves.

Wes arrived to go and see him and reported this:

He was a bit growly outside the cage door, she gave me some treats which he wanted, and with those I worked up to going inside his den and hand feeding him, touching his face, etc, no protests or growls at all once I got in there. He let me put a leash on him, and I told her I was taking him and as soon as we got out of his run he was a happy dopey excited boy, he let me do whatever I wanted, he was so happy to get out and was so happy to go with me, he pulled me all the way to the van and jumped right in the kennel in the back.

This boy is on stray hold until tomorrow but that will take place with us. We will place him in isolation at the Ranch and we can work with him on this behavior that he has in a dog run and help solve this issue.

I asked Wes to name him and he always has an interesting take so he chose this name because he’s a scared half starved little scarecrow, but he’s got spirit. 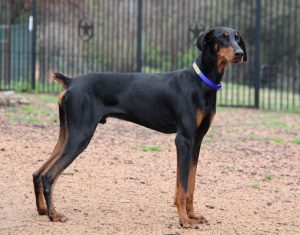