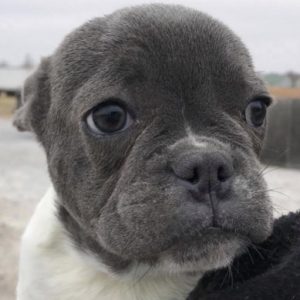 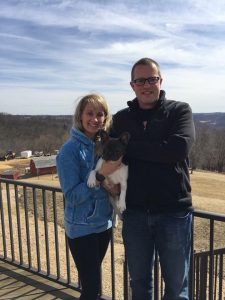 Spumoni met his forever humans, Tina and Shane Wehrs today. The car wasn’t in park before they came out to meet him in the driveway. Mo is going to have two sweet ‘big dogs’ to play with (Daisy and Bailey – gorgeous lab girls) and a bossy Frenchie sister (Lu) to… well, show him the ropes as only a Frenchie girl can.
He will live on acreage up in Coon Valley, WI and was already large and in charge on his first pack walk around the property. Tina has followed DRR for years, does rescue work herself – from transport to fostering – and understands pack dynamics.

This home is a custom fit for Spumoni. Getting along with all dogs he’s met, Mo has the makings of being a great ambassador in the foster world. His super power of reverting humans to baby babble with his cuteness, kind of clinched the deal.
The Wehrs also run a small sanctuary farm that includes not only the goats you can see over his mom’s shoulder in the picture but chickens and -get this- a dwarf cow. The goats pout and cry if they aren’t included on the pack walks so Tina has promised to post video of the menagerie out and about.
A huge shout out to his foster mom, Nicole. She did a great job getting him acclimated to her pack and communicating what he needed for his Happily Ever After.
Happy life, little man!

He was advertised as a stud prospect because both of his parents are blue and white pied. We rescued him and his brother who will remind you of Pinkie.
He was born on 9/27/17 so he’s just 4 months old and will require a stay at home or a work from home family. Once again he is going to be in Chicago and is on his way now.