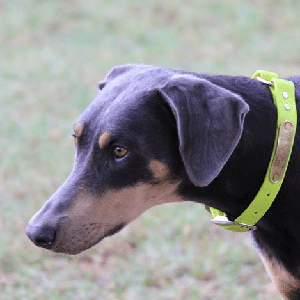 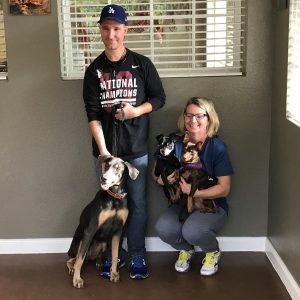 Warning: Wall of Text incoming…
*NERD ALERT* – We’re going deep…
I wanted to tell Star Sapphire’s “origin story” along with her adoption story cause I think it’s cool. I can’t promise you dry eyes by the end though. Know this.
I didn’t pick the name Star Sapphire out of a hat – and I didn’t pick it *only* because she’s a blue Doberman (sure made it legit though right?)
Ya’ll may have heard of The Green Lantern – actually there are hundreds and hundreds of Green Lanterns comprising all sentient races scattered across the cosmos. Each Green Lantern wields a ring which harnesses the power of green light formed from pure will to defeat fear.
Violet Lanterns claim that violet light formed from pure love fills an emptiness in their hearts and replaces their capacity for feeling fear. Their abilities come from violet power rings which wield the power of pure love.
The oath of a Star Sapphire:
For hearts long lost and full of fright,
For those alone in blackest night,
Accept our ring and join our fight,
Love conquers all – With violet light!
I named her Star Sapphire because I wanted to replace the emptiness in her heart and the fear of an uncertain future in her mind with pure conquering love.
Star Sapphire (the dog) was almost certainly feral for most if not all of her young life. She likely had little if any contact with humans and had no concept of a loving bond or a meaningful relationship with a human. She’s only about a year old and has had at least one litter of pups – all while living as a scavenger on the streets in a part of Texas near the Mexican border that feels like a forgotten wasteland – and it’s overrun with stray feral dogs. 99% of the dogs that arrive at the tiny shelters there never leave alive. Star Sapphire arrived at the shelter just days before her true rescuers would arrive.
Rescue Warriors – a rescue organization working out of Chicago founded and led by Jessica Suzanne works closely with another rescue – Freedom Ride Pet Transport founded and led by Jane Anderson – to arrange a rescue mission to this area in south Texas many many times per year to take as many dogs out of the local shelters as they can fit into their custom designed retro-fitted dog transport RV and takes them all the way back up to Chicago to be adopted.
Their most recent rescue mission barely a week ago saved 65 souls from the certain doom they faced in the chronically overcrowded shelters in this area and bought valuable time for the dogs they had to leave behind.
Terry Hathaway – an independent local rescuer working to get as many of these dogs as she can out of the shelters and into foster homes or taken away by other rescue organizations she works with – brought Phoebe to my attention and she came in the same way.
But Jessica Suzanne saw something special in Star Sapphire.
Word travels fast nowadays and soon she was brought to my attention as a Doberman lover and fellow dog rescuer. I didn’t have to think about it for long before I gave them the now infamous phrase that pays:
“Bathe her, and bring her to me!”
Two days later I got this beautiful dopey feral dog and that’s how the journey began!
And this is how it ends.
I love Star Sapphire and I would gladly have kept her here with me as my own dog. I thought I would be sad to see her go. I thought I would regret it and want her back immediately. I thought I would cry. None of those things happened. I was happy. Happy for her and happy for them.
You know what’s sad? The thought of Star Sapphire dying in a shelter because nobody would take her away from there. *That* makes me cry.
Pam and Chad Holbrook and their two little Min Pins contacted us about adopting Star Sapphire mere days after her first pictures appeared on our page.
They expertly jumped through all our adoption hoops and never once touched the sides.
They were willing to wait as long as it would take (90 days) for her to be medically cleared for adoption.
They read my 5-page dissertation on her behavior and temperament.
They volunteered to drive 20 hours straight to get here and then turn right around and drive 20 hours right back home with the dog they wanted from the start.
They immediately loved her as much as I love her when they met her today.
Clutch – they’re keeping the name.
Most importantly they met *my* one criteria for an adoptive home for any of our dogs – they can provide a *better* home for her than *I* can. Because that’s what I promise all of the dogs when we rescue them. And that’s what they all damn well get.
The pictures tell it all.
Happy life sweet girl, don’t you look back because it only gets better from here!
Wes

We rescued Star Sapphire from a shelter in Texas way down on the border of Mexico. She is a young girl maybe 2 would be my guess. She is a blue Doberman and she looks like she has a skin infection. She does have heart worm so she needs treatment for that. She is shy and very sweet.