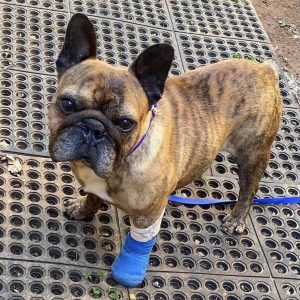 He is a reverse brindle. We don’t see them very often, but this is what that color looks like. He was the oldest male in the auction born on 9/7/14. He is 7 years old and has lived his whole life in a mill.

This boy will also be going to Trish in Oklahoma.
Formerly # 293

This is Storm he is at foster mom Trish’s house and as you can see his color is predominantly gold with his brindle lines being dark, so its basically the opposite of what you typically see.
We are having a hard time finding a home for Storm, he comes with lots of strikes which makes it hard to find a home, first of all he is 7 years old and that is always a deterrent to many adopters. Secondly he is not friendly with other dogs, he was a stud, he lived alone in a cage, he has no skills on how to be a pet and friendly with other dogs. That is his second strike.
Storm has been neutered, hopefully that takes away much of the testosterone that makes him dislike dogs but we won’t count on that, we are placing him in an only dog home. He had a little cyst on his foot and that has been removed thus the bandage.
As you can see he is gorgeous, this is a color you don’t see very often, he is a very well bred handsome Frenchie but we don’t pull punches and we make it very clear what his needs are to find a good match for him with a home that knows who he is.

This is Storm, the reverse brindle boy we rescued from the auction. He is the oldest male Frenchie from the auction at 7 years old and he was an absolute stud for them. The problem that arises from that life is he doesn’t like other dogs. He would prefer to just beat them up.
Now he’s been neutered and is living with foster mom Trish, but he is going to need to be an only dog. He is not going to change his mind about how he feels about other dogs so we have to roll with that and find him an only dog home. 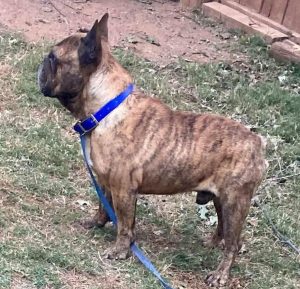