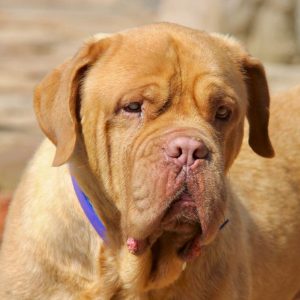 We are so very happy for this sweet boy. the day finally came when he was well enough to go to his family who by the way have been waiting for him since day one.
Sun Bear will go live with the Reust family in Keller, Texas. They have never owned a Bordeaux before but have followed the page for a while and loved Bubb’s and wanted to have a bear of their own. Bubbles was happy to greet them and give them some kisses. We told them that of course Sun Bear is very shy but he happily came out to say hello to them wagging his tail. They have a closet full of toys for him when he gets home which he will love because he loves himself some toys.
They plan to call him Bear which is good because he does know the name Sun Bear.
Off he went right out the door on a leash and into the truck and on his way to his life as a beloved pet just as it should have always been for him.
Happy life Sun Bear.
About Sun Bear:
What I know about this boy is obviously he is very light colored and basically blonde. Our bidder said he was very quiet in his run and he has a bad eye. We will have to find out what the extent of that is. I would like to add that the mill owner that we got these adult Bordeaux’s from has shown us over and over again that his dogs are not taken care of. Many times they have serious health issues from neglect and socially they have been lacking any kind of social skills, so we may have our work cut out for us here.
Formerly # 130.
Born on 10/29/17

Let me update you on Sun Bear. He has been an interesting and difficult case for us to figure out what he needs. He came to us a very shy boy, very quiet but as time went on he lost his appetite, continued to lose weight and became more and more lethargic. We ran every test on him and found nothing, Dr. Bronstadt is operating on what looks like his body has thrown him into an auto immune response due to stress. He was taken home by Cassandra and was put on prednisone for the next month to try and get him back on his feet. Here’s the problem, he will not eat his pills, doesn’t matter what you hide them in he will not. When she would cram his pills, he would wretch and vomit everything back up and then emotionally shut down and refuse to eat his food.
We consulted with Dr. Rolfe and we decided to give him a shot of prednisone and leave him alone with cramming pills. Now we see just a sweet, sweet, sensitive boy who just needs quiet and to be left alone.

He’s such an unusual sensitive boy. His color is very unusual being such a light blonde, his blue fleck in his eye and now his health.
We have had a tough few weeks with Sun Bear, he has slowly just become more and more disinterested in food, and lethargic. He’s lost 10 pounds now and we have tried everything to get him to eat to no avail. We tried taking him off of all of his medications in case they were making him feel sick. We tried anti nausea drugs and appetite stimulant drugs but nothing worked.
Dr Reno wanted us to bring him for X-rays and we did, they couldn’t see his liver or his spleen due to his belly being full of gas. We transferred him to Animal Diagnostic Clinic where Dr Bronstadt took over with ultrasound, and bloodwork. We found nothing. The assumption right now is that he may be having an autoimmune response due to stress. He will be going home with Cassandra to try and ease his mind.
The plan is to have him on steroids for 6 weeks to see if everything straightens out. After 6 weeks we will wean him off and see if it happens again. If it does we would be testing him for perhaps Addison’s disease that’s not presenting normally. If he gets weaned off and he does fine then we know it was just an auto immune response triggered by stress. The other problem is that he’s not yet neutered and has not yet had his treatment to kill his heartworms that he got while living in the mill. He cannot have any procedures until he’s off of steroids and showing us he’s healthy.

It’s looking like that will be several months down the road. He had an adoptive family but Laura told them to hold off and we will look for another dog for them. Sun Bear has a long road ahead of him and it’s best to just wait.

This is Sun Bear, yes he is a Bordeaux and yes his color is very light, but this is a color for Bordeaux’s that is recognized. He is a mess, he came to us from the mill sick with heartworms, skin infection, ear infections, and he will more than likely need surgery on both of his eyes that are scarred from entropian. He is a very quiet bear, very subdued but he now will give us a little tail wag and likes it when we give him a pet. Somebody will be lucky to have this low key sweet boy into their home…

This shy boy comes from a mill, a terrible mill, not a mill that takes care of their dogs.
Sun Bear has ears full of mites, skin infection, ear infection, lots of eye problems and probably needs surgery, and the kicker is he’s heartworm positive. Probably the cheapest thing to prevent with just using ivermectin that costs pennies to prevent heartworm and he couldn’t even do that. 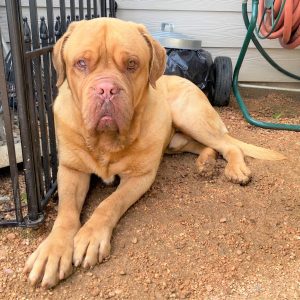 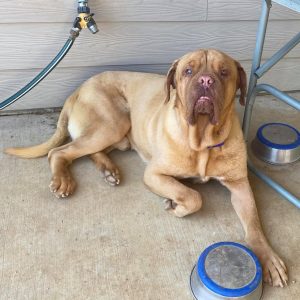