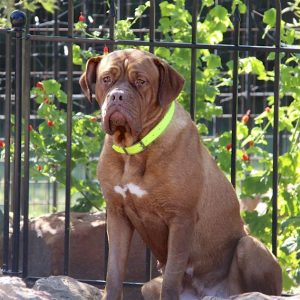 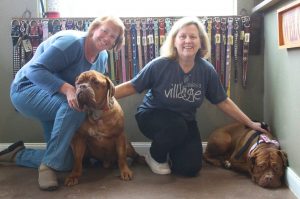 We’ve waited months and months for this adoption and today the day has finally come.

Thelma has been with us for nearly 6 months and she’s come as far as we can get with her, and it’s time for her to move on with her own family and see if they can take her to the next level.

Pappy Van Winkle has been with us for 4 months and he’s finally well enough to go too. Lucky for them they are going off to live together in a home that any dog could only dream of.

Thelma was sold at a dog auction and was a completely broken dog who we couldn’t get near. She wouldn’t walk past a human to even go inside a building. She’s come a long way but she’s got a long way to go, and we of course don’t know what’s possible, but her new mom doesn’t care and will give her all she’s got to help her move forward more.

Pappy Van Winkle was starving on the streets cast away by someone who didn’t care to look for him. He was emaciated, needed eye surgery and was sick with heartworms. It took months to get him healthy but he’s ready to go now.

Let me tell you about Thelma and Pappy Van Winkles new family.

Laura Beveridge lives in Augusta Georgia, you might remember me writing a post a while back with the awful story of her Bordeaux Dumpling that died after being given a dog treat that was supposed to be “no hide” and was sold on the market as such. Dumpling chewed this treat and choked on it and her throat swelled immediately and even though it was expelled she died very shortly after. To say Laura and her family were devastated would be an understatement and Laura vowed to reveal the lies and the disgusting tactics that are happening in the pet food and pet snack industry and that’s just what she’s done. She has launched a full force war on this industry and it was proven that the “no hide” treat that Dumpling died from was in fact rawhide and many other dogs had died from eating them too. That’s just how terrible this industry is, and just how unregulated it is. It’s something I’ve spoken about many times but there is lots of work to be done. She’s accomplished a lot but her fight will never end.
The loss of Dumpling will stay with her forever but Laura came to the Ranch in October for the bed and breakfast at Trav’s house that she won in the auction. While here she met Thelma who had just arrived, and Laura went in her den as Thelma cowered and she sat with her and sang to her and just cried.

She said then that she felt like Thelma needed her as much as she needed Thelma . She contacted me a couple of months later and said she was sure that she was ready and that she wanted to adopt Thelma but she also wanted to adopt a second Bordeaux. I told her that it would be best to send Thelma with a confident Bordeaux and Pappy Van Winkle would be my choice for her. With that it was set even though we knew it would be months before Pappy would be ready, but it didn’t matter Laura would wait however long it took.

Today is the day and both of these red bears will be on their way to a home with 3 boys who are thrilled to have them and are excited about getting them settled and working on Thelma with daily walks and confidence. I asked Laura what she would be naming them and she sent this:

“Their names will be Barbie and Beefcake…

As the mother of 3 boys, I always buy a Barbie ornament for my tree every year because it gives me something “girlie” that makes me smile. The Barbie doll is girlie perfection on the outside but the inside is hollow and becomes filled with all of the love, hope and dreams of a little girl. Thelma has lots of room on the inside to fill with hope, trust, and love and we will work hard to fill our “Barbie” with all that we can. I think about how emaciated Pappy was and you have all worked hard to give him a “Beefcake Bod” so Barbie and The Beefcake it will be. They will be the Beveridge BB’s”

So today’s the day we say goodbye to two red bears at the same time. We are thrilled for them both and we wish all of them a happy joyful life and of course we hope to see them on the happy tails page and fingers crossed Thelma makes more and more social strides in her very own home.

We brought this girl in from an auction where she was completely terrified and shut down, through a generous anonymous donor.  She was bred at just one year old.To take a one year old Mastiff and breed her is irresponsible enough but then you make it worse because she’s a baby who is very shy and has no social skills to raise her babies to be anything but just like her.

Thelma is suffering; she is shut down and terrified of humans. We are working on socializing her first with us at the Ranch, teaching her that we are kind and can be trusted. We will most likely tie her to us so she’s forced to be close to a human for several hours a day to let her understand that we are good and will not do anything bad to her. Right now she won’t come near us and runs if you try and get her like a feral animal.

Eventually she will need to go to a foster home and work on developing a one on one relationship in a home but for now we are going to broaden her horizons with other dogs and many humans.

Welcome to the Rescue, Thelma 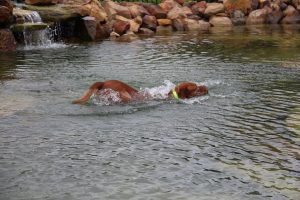