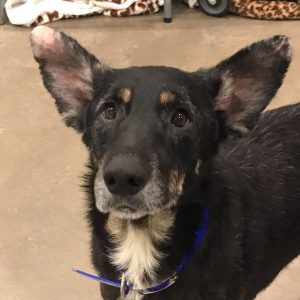 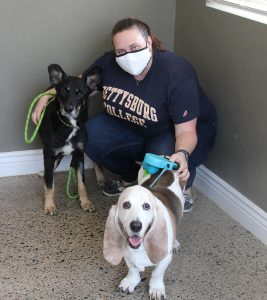 I can’t believe it was time to say goodbye to this boy we all love so very much. It has been a very long road for him, tons of time to get him well and then work on his social skills. He is a fabulous dog who had the unfortunate circumstance of being a street dog in the valley for years. Not anymore, today he began his life as a pet and he has gone to live with Anna Jordan from Plano.
He has a brother who is a Bassett Hound and Tony’s new name will be Gunnison after the state park in Colorado. Tony will be so happy to live a quiet peaceful life as just a beloved boy and he deserves that so very much. Anna is a big follower of the page and promises to update us on the Happy Tails page on how he is doing.
We wish them all the very best.

About Tony Bennett:
This boy right here came into our feed many day ago. We hoped that someone else would step up but they didn’t. Wes was pretty adamant about getting him so we put the word out that we would take him and he is now on transport from the valley today and will arrive late in Dallas tonight where Ricky will pick him up and take him to the sanctuary where Wes will be waiting for him around 10:00 pm to clean him up and put him to bed for the night.

Tony was having a hard time being loose with multiple dogs, lots of showing his teeth and growling. He lived on the streets for a long time so I’m sure he’s been forced to fight for years. We have worked with him very slowly and this is the result we have today. We are still going to place him in a quiet relaxed home but it’s good to know that he can co-exist nicely with others. By the way that glimpse you see of him yawning… we call that a stress yawn, they don’t do that because they are tired they do that because they have stress.

UPDATE 2/27/2021
We have some work to do with Tony, he came from the streets sick with URI, covered in skin infection and suspected sarcoptic mange. He spent weeks and weeks in isolation at the sanctuary. Now that he is healthy we have learned that he is quite fearful of other dogs. It’s not uncommon for a dog living on the streets to have been beaten up by other dogs frequently so this isn’t a surprise. We had a home picked out for Tony but it was a very active lifestyle that we just felt like he wouldn’t be a good fit for after all. Tony needs a quiet life with a few dogs and lots of time being a couch potato.

We are now slowly working with him to be around other dogs at the ranch, he gets very worried and growls a little bit so we are taking it slow. He has made it out to the big yard today and sits next to us while taking pictures but this is a huge step forward for him to walk about with the population. He is now in the office with me and all of my dogs under the desk and he is doing very well. He will need time and we have plenty of that so one day at a time for the socialization of Tony Bennett.

Tony Bennett has gone to see the doctor today. The reason we are putting pajamas on him isn’t to embarrass him but his poor skin is a mess, covered in infection and itching him. We hope to get him some relief with some much needed medicine. 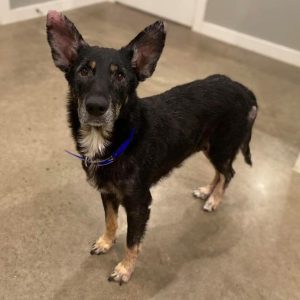