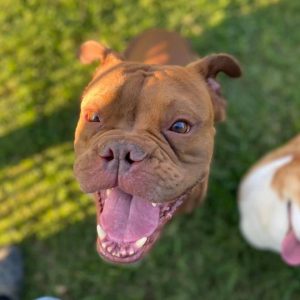 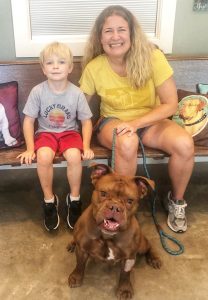 Look at the face on this silly girl. Off we sent Tugboat to her new life.
Tug boat was adopted by Molly Mitchell from Norman, OK. Her new name will be Meatball which I think is just perfect for her. Meatball will be the only dog and will have her own 6 year old boy named Beck to play with. They already have a trainer set up to help them with training. She jumped right in the car and never looked back

. Happy life Meatball!!
About Tugboat:
We were contacted yesterday about this cute little thing, we were told she was a Bordeaux, a stray down her Houston on a ladies property that has lots of birds. apparently she just showed up there and the assumption was she was dumped. She was shared all over lost and found pages but nobody has come forward. We are told she is a sweet girl and good with other dogs but she is not good with birds and needed to be removed. Mr. Ricky Barnes drove down and picked her up and brought her back to the sanctuary today.
She looks to be half Bordeaux and half bulldog perhaps, Travis just calls her a BullBear….

That’s all I know about her right now except Ricky said her hair is soft like velvet. 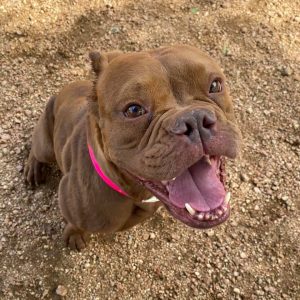 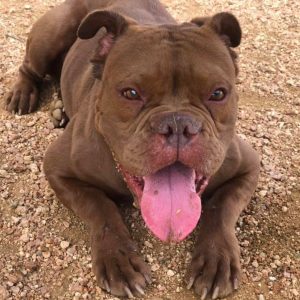 Tugboat is at the sanctuary, she had been mainstreamed with other dogs and did just fine, but she had an interaction with Marion who corrected Tugboat for her over zealous behavior, and Tugboat didn’t take correction well and a fight ensued.
Nothing serious, nobody was hurt or needed medical aid but we have since that time kept Tugboat separate until we can investigate further. We will most likely pursue an only dog home but I can’t be positive of that right now. In the meantime we will accept applications from families that don’t have other dogs but that doesn’t mean we won’t expand that horizon of acceptable homes in the future. We do know that she is not good with chickens which I am always astonished that any dogs are good with chickens, I know nearly all of mine would kill a chicken in a split second.

She would be a fun dog to have, loves to play, loves to wiggle and wag and is a sweet girl so if you are looking for a dog to add to your life and you don’t have other dogs she might be a fit for you.

Tugboat has come down with a respiratory infection and has been moved to ISO, we will be sending her for an echo on her heart at the end of the month to see what kind of issue she has. right now she’s a sick girl and needs to recover. Tugboat has lots of excited energy and we learned a few days ago that she doesn’t take corrections from other dogs well. Marion corrected her to settle down and a dog fight ensued. When a dog doesn’t take corrections from other dogs for their unbalanced behavior it leads us to know that she would do best in an only dog home so for Tugboat that is what we will search for.

Everyone who meets her loves her. Tugboat has quickly become a volunteer favorite. Such a happy girl who gets along very well with other dogs. We did discover on her initial exam that she appears to have stenosis of her heart. An echo is being scheduled to determine where and how bad but of course its concerning. Thankfully she is heart worm negative and she actually appears to be spayed but we will take a quick look with an ultrasound to be sure.